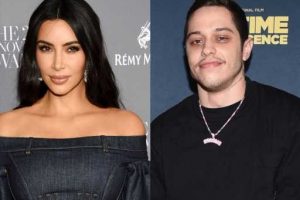 For anyone still scratching their heads over the Kim Kardashian-Pete Davidson hand-holding situation at Knott’s Berry Farm over Halloween weekend, there might more clues as to what is going on. Things could be a little more serious than “just friends” since the two were spotted out and about together in Davidson’s hometown of Staten Island in New York City on Tuesday night.

A source told TMZ that Kardashian left the comforts of her five-star Ritz-Carlton Hotel in Manhattan to venture out to the less sexy borough of Staten Island. The couple reportedly dined at Davidson’s favorite Italian restaurant, Campania, which only makes their possible coupling even cuter. (And yes, they entered through the back door for privacy, so it has to be serious, right?) Their adorable, not-yet-confirmed romance began on Saturday Night Live during the SKIMS founder’s hosting stint. They shared their first kiss in front of millions during a Jasmine and Aladdin sketch — and that just makes their possible beginnings a Hollywood fairy tale.

Of course, Kardashian isn’t divorced yet from husband Kanye West, who is reportedly not that thrilled with the attention his ex-wife’s coupling is receiving. He prefers that she refrain from any PDA until their divorce is finalized because “it doesn’t look good for their family and it doesn’t look good for her, or in the ‘eyes of God,’” according to a Hollywood Life source. OK, Kanye… you probably won’t win this fight.

And these two are probably just having fun — maybe a friends-with-benefits situation — since she’s dealing with her split from West while Davidson recently broke up with Bridgerton actress Phoebe Dynevor. Whatever is happening between them, they are trying to keep it as under the radar as possible, which seems impossible when you’re as famous as Kim Kardashian.