Serving Rubber Man from “American Horror Story” couture, Kim Kardashian wore one of her most extra outfits to date to support Kanye West.

The reality TV star went above and beyond to show that family and fashion come first even in a post-Kimye world. On Thursday, Kardashian attended the second listening event for the rapper’s forthcoming and much-delayed new album, “Donda,” at Atlanta’s Mercedes-Benz Stadium, where he is reportedly living until his new project is completed.

Despite their split, Kardashian and West assumed a united front, dressing in coordinated outfits. Hers was a black skin-tight Balenciaga body suit with a full-face mask featuring zipper holes for her eyes and mouth, and a long braided ponytail.

West wore a similar, mask-forward ensemble from the same brand, and added a vest with the album’s name ― a tribute to his late mother, Donda West ― emblazoned on the back.

The event was a full-fledged family affair: Kardashian and West’s kids ― daughters North, 8, and Chicago, 3, and sons Saint, 5, and Psalm, 2 ― also supported their dad in monochromatic black looks.

Kardashian posted some behind-the-scenes photos from the listening party, which reportedly drew 40,000 guests, including a full look at her daring outfit and snaps of the family gathering backstage.

In a video in her post, West, affixed to some sort of harness, rose above the stadium, bathed in an epic beam of light, which represented the “protection he feels from his mother,” according to The New York Times.

The new album, which is now expected to be released on Aug. 15, reportedly includes numerous mentions of the former couple’s split.

On one emotional track, West raps about “losing my family;” on another, he discusses purchasing a “sixty million dollar home” that he “never went home to” — presumably referencing the couple’s massive Hidden Hills house, where Kardashian currently resides. 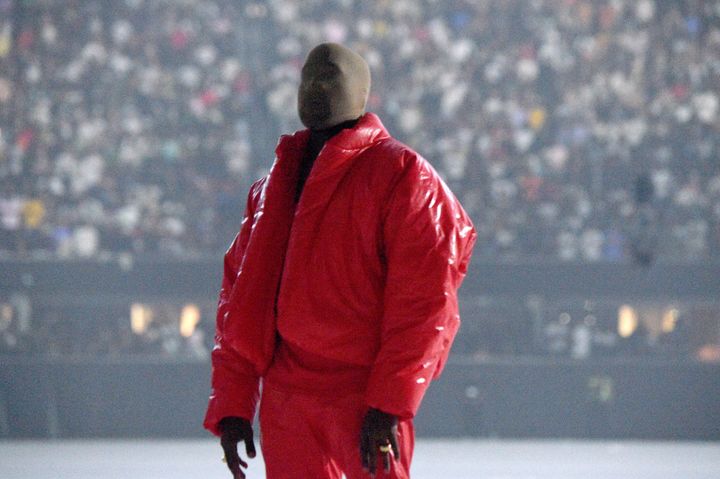 The SKIMS founder filed for divorce from West in February after six years of marriage.

The two have seemingly remained on good terms in the months since, expressing support for each other in social media posts and agreeing to joint custody of their children.

“We have an amazing co-parenting relationship. And I respect him so much,” Kardashian said about West during the “Keeping Up With The Kardashians” reunion in June. “You know that was my friend first, first and foremost, for a long time. So I can’t see that going away. I will forever be Kanye’s biggest fan. He’s the father of my kids. He will always be family.”

Her camp has continued to promote a similar idea, with an unnamed People source claiming that it’s “very important to her that the kids spend as much time as possible with Kanye.”

“Kim is trying to be supportive. She is focused on co-parenting,” the source added. “Nothing has changed otherwise. They are still moving forward with the divorce.”