Home » Entertainment » Kimberly Guilfoyle's Jan. 6 Speech to Trump Rioters Made Her $60,000 in 3 Minutes

Kimberly Guilfoyle's Jan. 6 Speech to Trump Rioters Made Her $60,000 in 3 Minutes 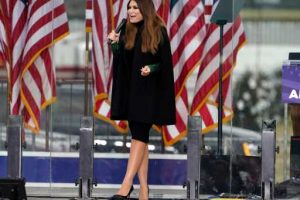 The Jan. 6 hearings are offering new insight into what went down on that day in 2021, which reveals a complex web of complicity within the Donald Trump administration. The latest family member catching the heat is Donald Trump Jr.’s girlfriend Kimberly Guilfoyle, who spoke at the “Stop the Steal” rally before the insurrection on Capitol Hill began.

Representative Zoe Lofgren, a member of the House select committee on January 6, revealed some shocking insider information about Guilfoyle’s participation in the events to CNN. According to Lofgren, Guilfoyle was paid $60,000 for an almost three-minute speech to introduce Donald Jr. to the Trump crowd. Lofgren pointed out that she’s “not saying it’s a crime,” but she strongly believes that “it’s a grift.” The Democratic representative from California noted that she’s part of “a legislative committee,” so it’s up “for somebody else to decide” if a financial crime has been committed.

Lofgren’s concerns were a part of Monday’s hearing, where she shared that the Trump administration leaned heavily into the stolen election narrative “to raise millions of dollars from the American people.” It is believed that the Trump family and other work colleagues received financial gains from these donations, so Guilfoyle won’t be the only one in the hot seat once more evidence has been revealed.

On Monday, Lofgren read off notes from select committee senior investigative counsel Amanda Wick about the astonishing amount of money that was raised by the Trump administration after the Nov. 3, 2020, election. “Claims that the election was stolen were so successful, President Trump and his allies raised $250 million, nearly $100 million in the first week after the election,” Wick stated in her research. Guilfoyle testified in April, after being subpoenaed by the committee, because her participation in the rally and the events leading up to the insurrection were considered crucial to the investigation. As additional information comes to light, it’s likely that more Trump allies will find themselves trying to explain their inexplicable actions on that fateful day.