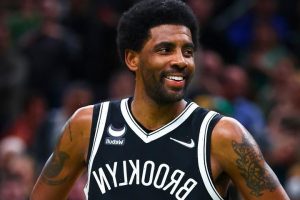 Brooklyn Nets continues to be at the forefront of the NBA trade conversation in the off-season. Recent reports indicated that the Boston Celtics have entered the trade race for Kevin Durant, showing that they are willing to give up one of their star players Jaylen Brown.

Earlier this year, Kyrie Irving opted into his $37 million USD player option, affirming that he hopes to fulfill his four-year contract with the Brooklyn Nets. At the time, he confirmed that he does not wish to enter the free agency market and stands by playing with Brooklyn.

NBA Insider Shams Charania has doubled down on Irving’s wish to stay with the Nets in a recent report. He spoke on the Pat McAfee Show and said, “Kyrie Irving opted in with the full intent of playing out next season as a Brooklyn Net. In his mind, he’s playing next year in Brooklyn with or without Kevin Durant.” It is clear that Irving has no intention of basing his decision on whether or not KD will stay or go and does not appear to change course from his option at all. Brooklyn Nets are still focused on bringing a championship to the franchise. After a first-round sweep in the playoffs against the Celtics, the Nets are looking to come back stronger than ever.