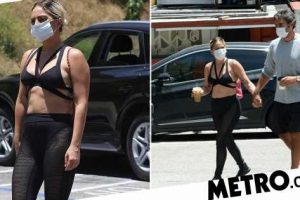 Lady Gaga and her boyfriend Michael Polanksy were spotted taking precautions while stepping out for their morning coffee together in Hollywood.

The singer, 34, and her man sported his and hers face masks for their breakfast date, making sure to cover up with their protective equipment over in the US where coronavirus lockdown restrictions have started to ease.

Gaga has been isolating in lockdown with Michael and proving their romance is still going strong, they were pictured holding hands as they enjoyed some fresh air together, while grabbing their caffeine fix.

The Born This Way hit-maker was dressed in black mesh leggings, which she teamed with a cool cut-out crop top, while Michael kept it casual in a long grey tee and black shorts.

He stood out, thanks to his orange sneakers, with the pair seeming pretty in sync as they started their day right in the sunshine with their takeaway drinks.

Gaga first went public with her relationship with Michael back in February, later making their romance Instagram official.

At the beginning of lockdown, she told fans it was ‘so wonderful’ to be at home with her boyfriend, while sharing a cute selfie of the pair.

Gaga captioned her post: ‘Day 6 of self-quarantining! Going strong, playing video games and cards, and taking care of ourselves.

‘Important reminder: keep your mind as stress free as possible and your body moving. #selflove#selfcare#bekind try not to pass it in case you have it #corona it’s ok and so wonderful to stay home if you can! What a kind act for the world.’

While in lockdown, Gaga released her new album Chromatica – her sixth studio album and first release in four years following Joanne in 2016.

Despite initially freaking out before dropping her new release, Gaga was overwhelmed by the incredible response Chromatica received from fans, with the star tweeting a video of her in tears.

She told her followers: ‘I’m not tweeting cuz I can’t stop crying I’m so happy. Thank you (sic)’

She explained: ‘As much as I want to listen to Chromatica together as a global group of kindness punks right now, our kindness is needed for the world today.

‘I’m going to postpone our listening session right now and encourage you all to take this time to register to vote and raise your voice. I’m so glad the album is bringing you some joy, because that’s what I always wanted it to do. We’ll reschedule this very soon.’

Gaga joined many celebrities in calling for change, following news of Floyd’s death after he was arrested. Footage emerged of a white police officer kneeling on his neck for over eight minutes, despite Floyd’s insisting he couldn’t breathe.

Four police officers involved have been fired, and officer Derek Chauvin was arrested on Friday on suspicion of third-degree murder, meaning he has been accused of killing Floyd without prior intent, but with disregard for his life.

END_OF_DOCUMENT_TOKEN_TO_BE_REPLACED

END_OF_DOCUMENT_TOKEN_TO_BE_REPLACED
We and our partners use cookies on this site to improve our service, perform analytics, personalize advertising, measure advertising performance, and remember website preferences.Ok