Landmark Broadway Deal Gives Actors a Piece of the Profits

Broadway is booming, and now more actors are going to share in the riches.

In a groundbreaking agreement Friday, the commercial producers who finance Broadway’s big hits have agreed to give a percentage of profits to performers who help develop successful shows.

The deal, reached between Actors’ Equity, a union representing 51,000 performers and stage managers, and the Broadway League, a trade organization for producers, is a milestone, marking the first time that the industry’s financiers have tacitly agreed to acknowledge that performers are contributing ideas, not just labor, to shaping new musicals and plays.

Hit shows already generate paydays for producers, directors and stars; many of them now will bring steady if modest paychecks to the supporting actors and dancers, some of whom still take survival jobs, like waiting tables, between shows.

“Creating a new show is hard,” said Mary McColl, the union’s executive director. “If we’re along for that ride at the beginning, for not much money, we think we should be able to share in the success once it has recouped its expenses.”

The deal brings to an end a five-week strike in which the union barred its members from participating in work on major shows in commercial development.

Equity said the agreement would split 1 percent of a Broadway show’s profits among actors and stage managers who took part in development with its producers. The profit-sharing will last for 10 years and will include money generated by touring productions.

The union said the agreement also includes a salary increase for actors and stage managers participating in show development.

The president of the Broadway League, Charlotte St. Martin, offered a restrained endorsement of the agreement, saying producers were “pleased we’re going to get back to work.”

She took issue with Equity’s description of the deal as profit-sharing. But she acknowledged the significance of the agreement, saying, “This is a new way of doing business.”

[What’s new onstage and off: Sign up for our Theater Update newsletter.]

Broadway shows, especially musicals, take years to create, often through such developmental steps as labs, workshops and staged readings. Many hits have been incubated in these labs, but until now, the actors and stage managers have been guaranteed only a weekly salary.

The long-simmering issue came to a head with “Hamilton,” as it became clear that the show would become staggeringly profitable, and actors involved in its development grew unhappy that they would not share in the profits.

After those actors hired a lawyer in 2016 and became more vocal about their concerns, the show’s producers agreed to a profit-sharing deal, but the visibility and perceived injustice of their dispute prompted a broader conversation among actors about how they are treated financially when a show hits the jackpot. 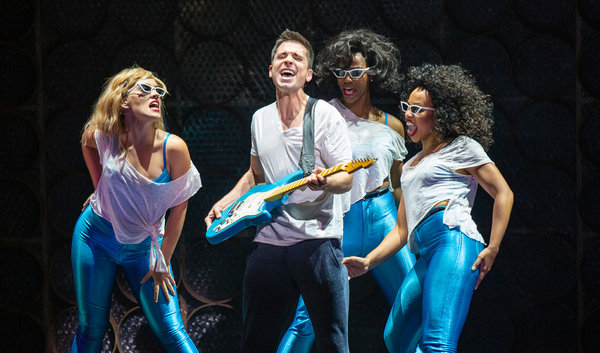 Some producers — notably Disney, for “Frozen,” and Lorne Michaels, for “Mean Girls” — volunteered to share profits as well. But the labor union sought a promise that all producers would do so when the contract governing actor participation in developmental labs came up for negotiation last year.

Neither “Frozen” nor “Mean Girls” has yet become profitable, but both productions have been selling well thus far. Kyle Selig, who plays a teen heartthrob in “Mean Girls,” said the money would allow him to focus on performing full-time.

“I’m a younger actor, and my first five or six gigs were all developmental work,” he explained. “We’re being asked to do more and more and more, and nothing was changing payment-wise.”

Privately some producers have argued that actors are compensated for their work on labs — about $1,000 a week, a fee that has not changed in more than a decade — while it is investors who take financial risk, and the creative team that truly shapes stories.

But actors have pointed to a practice in television and other parts of the entertainment industry — the payment of residuals for work on shows and commercials — as a precedent for compensating performers for work that leads to long-term success.

According to the union, one in four Broadway shows now puts together a developmental lab on the way to opening. There have been 75 developmental labs since 2016, about half of which led to a production, the union said.

Last month, a lack of progress on the issue prompted Equity members to strike. The strike — which did not interfere with shows already running — was the first such job action taken by Equity in nearly 50 years.

Equity unanimously approved the new agreement Friday, and gave the go-ahead for development work to start up again immediately.

The two projects that stand to benefit soonest are the jukebox musicals “Don’t Stop ‘Til You Get Enough,” about Michael Jackson, and “The Heart of Rock & Roll,” using the music of Huey Lewis and the News. Each had been planning a lab this winter.

Matt Doyle, who led a production of the Huey Lewis musical at the Old Globe in San Diego and will do the same in a New York lab later this month, said he was delighted by the agreement, both because he wants to get back to work and because he appreciates that actors are getting their due.

Mr. Doyle, who has done many staged readings and developmental labs over the years, pointed out that when actors are hired to replace cast members in a show, they are often asked to follow the outlines of the original performance.

“Our creative input matters,” he said. “There is a lot in creating a role that is not just saying the lines that have been given to you, but bringing yourself into that role.”

The agreement comes at a time when Broadway is bringing in more money than ever — during 2018, Broadway shows were seen by 14.37 million people and grossed $1.825 billion. Although most shows still fail financially, a few (“The Lion King” and “Wicked,” for example) have grossed billions of dollars by staging multiple productions over many years.

Stars of Broadway shows — especially those with demonstrable fan bases from film or pop music careers — occasionally negotiate their own deals that include weekly salaries of tens of thousands of dollars and even a percentage of the box office. Most performers — dancers and other ensemble members — are paid the Broadway minimum, about $2,000 a week.