Late-night hosts seized on The Washington Post’s report that President Trump had made more than 10,000 false or misleading statements since taking office.

“I know all politicians bend the truth, but Trump clearly has no relationship with the truth. If he sees truth on the street, he’s probably, like, ‘And you are?’” — TREVOR NOAH

Jimmy Kimmel decided that this milestone made Trump not just a pathological liar but a mythological one, while James Corden said that Trump tracked his lies like other people track their steps.

“If Trump had a dollar for every lie he’s told, he would say he had a billion dollars.” — STEPHEN COLBERT

“The lies are picking up steam. It took him nine months to rack up the first 5,000 lies. The next 5,000 it only took seven months. If his lies were on the stock market, it would be like buying Apple at $10 a share.” — JIMMY KIMMEL

Between “Avengers: Endgame” and “Game of Thrones,” Corden declared that it had been “Super Bowl weekend for virgins.” Jimmy Fallon, meanwhile, said “it was the first time kids had to tell parents, ‘O.K., that’s enough screen time.’”

“It’s a 182-minute epic, wrapping up 21 movies telling one massive story,” Colbert said of “Endgame.” “There’s been ups and downs, rivalries and infighting, but the heroes put their differences aside to fight the true villain. Do you hear that, Democrats? Go nuts for the primaries, then just shut up and win.”

While the fourth and final “Avengers” movie brought in more than a billion dollars worldwide, the third episode of the last “Game of Thrones” season was the most tweeted-about TV show ever, Corden said. (“The takeaway from this,” he told his audience, “is you all need to start tweeting about this show a little bit more.”)

Twitter is how some celebrants of this nerdy weekend got themselves into trouble. The Buffalo Bills running back LeSean McCoy upset fans by sharing a major “Avengers” spoiler.

“He tweeted a key plot point from the movie and people were very angry. They’re saying this is the second-worst thing a running back for the Buffalo Bills has ever done.” — JIMMY KIMMEL

Joe Biden’s announcement that he’s running for president came while several late-night hosts were on hiatus last week, and they made up for it on Monday.

“When last we met, a lot of establishment Democrats were wringing their hands about stopping Bernie Sanders. They were afraid that’s he’s unelectable because he’s 77 years old. Well, enter a plucky, young up ‘n comer a full 14 months younger than Bernie, former vice president and man pointing at the next woman he wants to sniff, Joe Biden.” — STEPHEN COLBERT

“Former Vice President Joe Biden has officially announced he’s running for president. And he’s already a front-runner, which is ideal because nothing good happens when he comes from behind.” — SETH MEYERS

“It just came out that in the first 24 hours of his campaign, Joe Biden raised $6.3 million. He did it in a very interesting way: He stood outside of a movie theater and said ‘Give me 1,000 bucks or I’ll ruin ‘The Avengers’ for you.” — JIMMY FALLON

When asked recently how old he thought was too old to be president, President Trump responded, "I just feel like a young man. I’m so young! I can’t believe it. I’m the youngest person. I am a young, vibrant man.”

“Nothing says young, vibrant man like a 72-year-old yelling at people on his front lawn.” — JIMMY FALLON

“That’s usually what you hear someone say as the nurse leads them out of the parking lot back to the day room. ‘I’m a young, vibrant man. Let me go, young lady. General Eisenhower is expecting me on Omaha Beach.’” — STEPHEN COLBERT

The “Game of Thrones” cast members are having fun on what’s likely to be their press tour finale. Several of them appear in this “Game of Phones” sketch on “Jimmy Kimmel Live,” answering questions from fans like, “You expect me to believe a 90-pound girl can defeat an army of White Walkers?”

Lena Waithe, creator of Showtime’s “The Chi” and BET’s “Boomerang,” among other projects, will stop by “Jimmy Kimmel Live!” and probably talk about her latest news: She’s joining the cast of “Westworld.” 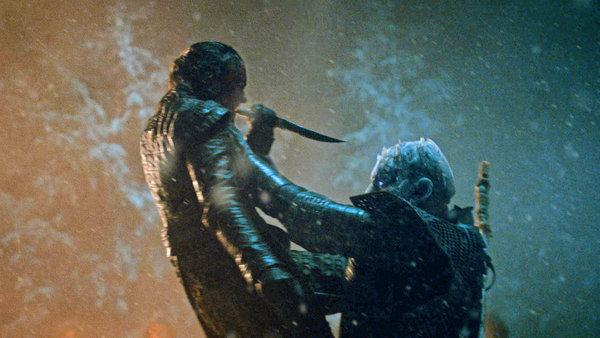 For your continuing “Game of Thrones” fix this week, a look at Arya’s catspaw dagger (note: don’t read until you’ve watched episode three) and how the show is inspiring mothers to name their baby girls not just Arya, but Khaleesi and Daenerys, too. (There have also been some Sansas and Cerseis.)

END_OF_DOCUMENT_TOKEN_TO_BE_REPLACED

END_OF_DOCUMENT_TOKEN_TO_BE_REPLACED
We and our partners use cookies on this site to improve our service, perform analytics, personalize advertising, measure advertising performance, and remember website preferences.Ok