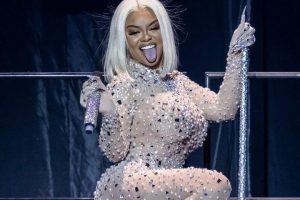 Just a few weeks later, the Atlanta rapper is continuing to keep things upbeat with a new single called “Another Nasty Song,” out via RCA Records.

A music for the track opens with Latto at a photoshoot, posing for the camera. “‘Cause this here another nasty song,” she raps at the intro.

2022 has marked a momentous year for the Queen Of Da Souf artist. Alongside dropping 777, Latto rounds off the year with two GRAMMY nominations under her belt. The rapper is up for “Best New Artist,” as well as “Melodic Rap Performance” for a live performance of her hit single “Big Energy.”

In other music news, PinkPantheress is channeling overwhelming angst with her new Take me home EP.
Source: Read Full Article