A secret system of bells to warn when other adults were approaching. A mock wedding ceremony with a young boy, complete with a gold ring studded with diamonds. Parents who were only too happy to be guests at Neverland, unaware what was happening to their sons a few closed doors away.

By the time he died at age 50 in 2009, Michael Jackson had been trailed by allegations of child sexual abuse for more than 15 years. That side of his life is the subject of a new two-part documentary, “Leaving Neverland,” that began airing on HBO Sunday night. (Part Two airs on Monday night, but is already available to stream on HBO Go and HBO Now.) It contains granular, disturbing detail that could reshape his legacy for years to come.

The Michael Jackson estate has denied all the allegations, likened the documentary to a character attack and sued HBO. And as soon as the program started, Jackson fans swarmed the #LeavingNeverland hashtag on Twitter, criticizing the documentary and Jackson’s accusers. But as the film continued on, others reacted with disgust and dismay at what they were seeing.

[Our critic Wesley Morris reviews the documentary and wrestles with what it means for Jackson’s fans.]

Here are some key points from part one:

The lure of fame was irresistible.

The movie shows how two boys and their families were pulled deep into Jackson’s orbit through fame and show business.

Wade Robson, an aspiring dancer who became a successful choreographer as an adult, met Jackson after winning a dance competition. His mother, Joy, went so far as to move herself, Wade and her daughter to Los Angeles from their native Australia, leaving behind her husband and eldest son, on promises that Jackson would work with them to make Wade a star.

James Safechuck met Jackson when he was cast in a Pepsi commercial that featured Jackson, and at age 10, Safechuck joined Jackson on tour. His mother, Stephanie, recounts meeting celebrities like Sean Connery, flying first class and being chauffeured in limousines. James describes the otherworldly frenzy of just walking with Jackson to his car, slicing through waves of screaming fans.

Every night, he said, he would sleep in a hotel room with Jackson. His mother recounts that as the tour went on, her room got farther and farther from the one her son and Jackson shared.

“Everybody wanted to meet Michael or be with Michael,” James Safechuck says as the film opens. “He was already larger than life. And then he likes you.”

Jackson built trust with the families.

He nurtured relationships, including with the boys’ mothers. He spent hours on the phone with James and Wade, but he would also call their moms, just to talk to them.

Jackson also spent time at the Safechucks’ modest home in Simi Valley, Calif. He could have been anywhere in the world, Stephanie Safechuck said, but he chose to be with them.

“He was a son I started to take care for,” Stephanie Safechuck said. “He would spend the night, I’d wash his clothes.”

She said that she once told Jackson that she had prayed for her son’s success in getting into commercials, and that he went on to find success right away.

In response, she said, Jackson told her that he had prayed, too. He had prayed for a friend, and then he found James.

The Neverland Ranch haunts the documentary.

The Neverland Ranch was Jackson’s California compound that included an arcade, an amusement park, an assortment of exotic animals and a train station. It was the perfect playground for children, and in the documentary, it is also portrayed as the perfect place to keep a child apart from their parents.

Robson’s and Safechuck’s families were offered rooms in a guesthouse, which was separate from the main house where the boys would each stay with Jackson. Wade Robson’s mother, Joy, recounts that she got the sense during one long visit that her son and Jackson were avoiding her — and in such a big place, that was easy to do. She said she spent a lot of time alone and with Jackson’s chimpanzees.

[“Leaving Neverland” could threaten the fortunes of Jackson’s thriving estate.]

One of the most uncomfortable sequences in the film is when James Safechuck recounts all the places in Neverland where he said that he and Jackson had sex:

On a blanket in Jackson’s closet, where several doors and a system of bells would alert them if someone was coming. In a private screening room at the back of the movie theater. In a house filled with Jackson’s memorabilia, such as a rhinestone jacket he wore to the Grammys. In an attic. In a castle in the theme park. In an upstairs room in the train station.

The property had been for sale for several years, with an asking price as high as $100 million, and was recently listed with new brokers for $31 million. 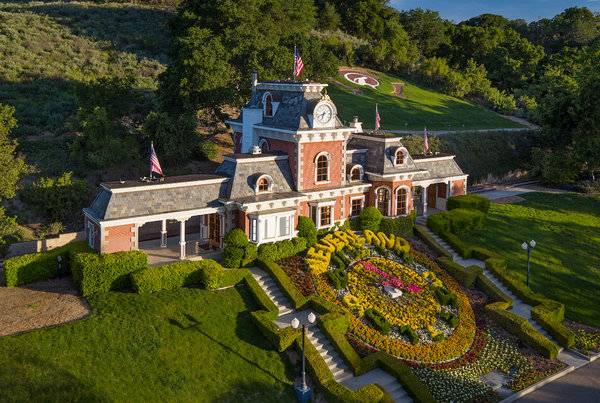 The accounts are disturbing at times.

James Safechuck takes a small gold ring, studded with diamonds, out of a jewelry box and slips it onto his finger. It doesn’t fit past the fingernail of his adult hand.

This was the ring, he said, that he and Jackson used in a mock wedding ceremony. When they went to a jewelry store to pick it out, they pretended Jackson was buying it for a woman whose hands were small, like the boy’s.

As each sits alone in front of the camera, Robson and Safechuck recount a frightening pattern of abuse by Jackson, made even more disturbing by the similarities between them.

Both said Jackson would ask them to get on all fours so he could look at them from behind while he masturbated. He asked them to rub his nipples. He would perform oral sex on them and they on him. He showed them pornography.

Safechuck says the abuse started when he was 10. Robson says it began when he was 7. They say it went on for years.

The Jackson estate has hit back.

Jackson was the subject of two child molestation investigations during his lifetime. The first time, Jackson reached a settlement with the boy who accused him and no charges were filed against him. The second time, after a trial, Jackson was acquitted.

[Read a timeline of Jackson’s history of sexual abuse allegations.]

Jackson’s defenders have pointed out that both Safechuck and Robson have told authorities in the past that they were not molested by Jackson, and that Robson took the stand in Jackson’s defense during the trial. Both men said that Jackson had trained them for those moments for years, drilling into them that if anyone found out, their lives would be over, or that he and they would go to jail.

The Jackson family and his estate have emphatically denied the allegations, though neither they nor any other Jackson supporters appear in the film.

“The creators of this film were not interested in the truth,” the family said in a statement. “They never interviewed a single solitary soul who knew Michael except the two perjurers and their families.”

The statement said that Jackson “was and always will be 100 percent innocent of these false allegations.”

Last month, the coexecutors of Jackson’s estate sued HBO and its parent company, Time Warner, for $100 million for breach of contract, saying that by airing the documentary, HBO violated a nondisparagement clause in a 1992 contract it signed before airing a Jackson concert in Romania. HBO said it would not change course.

“Despite the desperate lengths taken to undermine the film, our plans remain unchanged,” HBO said in a statement. “This will allow everyone the opportunity to assess the film and the claims in it for themselves.”

Devoted Jackson fans had been girding themselves for the documentary, and through a loose network of pro-Jackson websites and hashtags began planning to counteract the film.

When it began, they overwhelmed the #LeavingNeverland hashtag with thousands of Tweets calling the men liars and the film a work of fiction.

The Jackson estate encouraged people to watch the Romanian concert instead.

But as part one moved into more disturbing territory, viewers began reacting with disgust, shock and sadness.

Some asked why the men’s parents allowed them to get so close to Jackson.

The men have more to say.

The second half of the documentary, airing on HBO Monday night and available for streaming now, moves through Jackson’s trial, introduces Robson’s and Safechuck’s wives, and takes the audience through their decision, after years of publicly proclaiming Jackson’s innocence, to come forward with their accounts.