Home » LEGO Has Officially Announced Its Speed Champions 2021 Line up

LEGO Has Officially Announced Its Speed Champions 2021 Line up 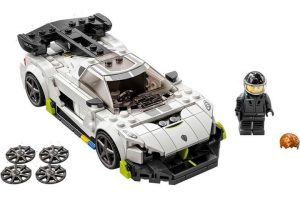 Highlighting the collection is the Koenigsegg Jesko, which features only 280 pieces and shapes every portion of the Jesko’s silhouette with great detail and accuracy. With just 299 pieces, the Toyota GR Supra comes in the iconic factory yellow paintwork, and what appears to be a removable roof. The McLaren Elva model greatly mimics the unique shape of the actual model with great precision, bearing one of the more unique constructions both on and off the road. The Chevrolet Corvette C8-R race car and the 1968 Chevrolet Corvette are worth mentioning. It showcases the evolution of the auto brand, pinpointing its earlier and current designs. The model is one of the larger sets with 512 pieces, going for twice the average price.

In case you missed it, BROSH’s new Captain America-themed pomade will bring you back to the ’40s.
Source: Read Full Article