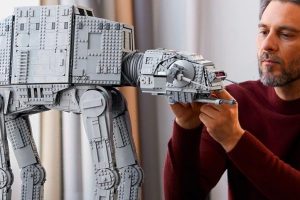 Standing at over 24.5 inches high, 27 inches long and and 9.5 inches wide, this AT-AT is modeled after the vehicle seen in the Battle of Hoth in Star Wars: The Empire Strikes Back. The figure features posable legs and heads, opening hatches, cannons, rotating cannons, a bomb-drop hatch and a hook that can be attached to Luke Skywalker, while its interior can fit up to 40 LEGO minifigures, four speeder bikes and the E-Web heavy repeating blaster. The piece also includes nine LEGO Star Wars minifigures: Veers, Luke Skywalker, Snowtrooper Commander, four Snowtroopers and two AT-AT Drivers and, finally, an information plaque for those looking to display the model.

The LEGO Star Wars Ultimate Collector Series AT-AT will be available on the LEGO webstore starting November 26, and is priced at approximately $800 USD.