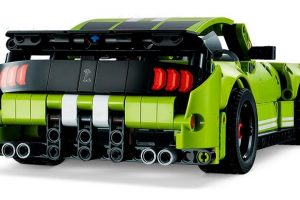 LEGO Technic is no stranger to taking on the automotive industry, having previously presented its take on the Lamborghini Sián FKP 37 and even a driveable life-size Toyota GR Supra, but now it heads to the drag strip for its latest offering: a Ford Mustang Shelby GT500.

Like the real car, this LEGO Technic iteration is served in bright green with twin white racing stripes and serves up its usual boxy muscle car aesthetic. Comprising 544 pieces, including two pull-back motors so that the car can shoot off as it would on a drag strip, the model can also be displayed rather than played with if desired, sitting on a rear cover that keeps the car stable when static.

Furthermore, the car is compatible with the LEGO Technic AR app, which allows you to test the car on a virtual race track. Designed to be built by anyone aged nine and over, the LEGO Technic Ford Mustang Shelby GT500 costs £44.99 GBP (approximately $61 USD) and can be bought on LEGO’s site now.