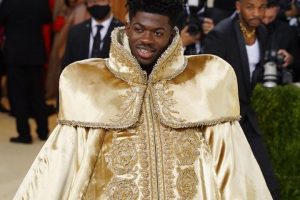 Following the release of his debut studio album, MONTERO, Lil Nas X is teaming up with Jean Paul Gaultier to release a surprise collection on Monday, September 20.

Little is known about the collaboration except for breadcrumbs hinted at by the two on their respective social media accounts. Earlier this month, Lil Nas X tweeted: “big announcement soon” to which the French fashion house replied on Thursday with emojis that hinted at a shared project.

The brand has also been retweeting Lil Nas X and mentions of his album, suggesting that the collaboration will have something to do with the album’s visuals.

A link has also been added to Jean Paul Gaultier’s social media pages leading to a website set up specifically for the collection drop. The website provides little information about the collaboration but features a similar cloud motif to the Montero album cover. Fans can subscribe to updates about the collection on the website.

Lil Nas X has been keeping busy in recent weeks, signing onto the cast of The Proud Family reboot on Disney+ and attending both the VMAs and The Met Gala.