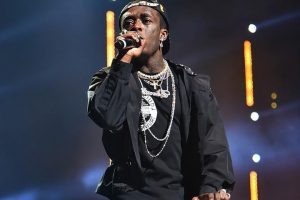 In celebration of the three-year anniversary of Juice WRLD‘s debut album Goodbye & Good Riddance, Interscope Records has reissued the record with some fresh material, one being a “Lucid Dreams (Remix)” that features Lil Uzi Vert.

And to coincide with the release of the new tune, Juice WRLD‘s team also put together a crazy music video to go along with it, and the entire Mooch-directed 4:17 clip is executed in video game-like form. The first half of the visual displays Juice WRLD chained to a bed and a dark angel controlling his movements before sending him into the interstellar and later on in an urban city where he encounters an army of demon-looking creatures. From there, Lil Uzi Vert enters onto the premises — pink diamond shanked into his forehead and all — and essentially teams up with Juice to fight off the aforementioned angel and her band of creepy minions. By the power of their high-powered cars and plethora of weapons, they eventually defeat the dark figure and set her ablaze.

A preview of this track actually leaked back in 2018 via Uzi on IG live, but now that the full version is finally out, it has definitely been worth the wait.