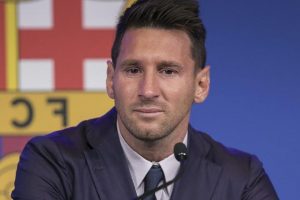 Following his shocking exit from FC Barcelona, additional news regarding Lionel Messi and his departure has surfaced. Upon going back to his Barcelona dressing room to clear out his locker, Messi reportedly could not take all his items with him.

AS reported, “[Messi] could not take all the objects that he still had inside as some were more bulkier than others. Among the items he had to leave behind was the award he received for the best player of the 2018 Joan Gamper Trophy match.” The footballer received the star-shaped awarded when he played against the Boca Juniors, giving an assist and scoring a goal in the 45 minutes he played. The game ended up in a 3-0 win for the player and his team.

Messi is aware that his locker will likely have a new tenant this season. All that is currently left of the locker is the number 10 on the drawer and the trophy, sitting atop the furniture and leaning against the wall. The six-time Ballon d’Or winner has won 45 trophies with Barcelona and another 40 major individual awards. It remains to be seen if the trophy will be sent to the footballer or be kept by FC Barcelona.

Elsewhere in sports, Kevin Durant clarified if his argument with Draymond Green caused him to leave the Warriors.
Source: Read Full Article