Home » Entertainment » Live Performing Arts Are Returning to N.Y.C., but Not All at Once

Live Performing Arts Are Returning to N.Y.C., but Not All at Once 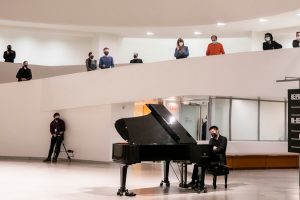 This is the weekend New York City’s theaters, music venues and comedy clubs have been waiting for. The chance to start holding performances again for a live, flesh-and-blood audience.

As that date has drawn closer, it became clear that the arts scene will not be springing back to life, but inching toward it. It isn’t just Broadway theaters and large concert halls that see the one-third capacity rule as prohibitive; it’s smaller venues, including some of the city’s foremost jazz and rock clubs, as well.

Still, green shoots are sprouting up across the city.

On Friday, the monologuist Mike Daisey is performing for a 22-person audience at a theater on the Bowery. That evening, the Comedy Cellar has a dozen shows scheduled for its four stages. On Saturday afternoon, as part of a series of pop-up arts events across the state, a Broadway theater will be opening its doors to host a performance for the first time since the industry shut down. (It’s invite-only for volunteers and health care workers with the Actors Fund and Broadway Cares/Equity Fights AIDS.)

For some artists, the thrill of performing again in a dark theater or club with a spotlight on them, is within reach.

“We had more comedians than we can use vying for spots,” said Noam Dworman, the owner of the Comedy Cellar, where this weekend’s shows are sold out. “They’re really eager to perform.”

At the Cellar — as well as other comedy clubs scheduled to open on Friday, including Stand Up NY and New York Comedy Club — the main safety protocols are a mask requirement, social distancing and temperature checks. Some performances, like the slate of spring programming at the Shed in Hudson Yards, set a higher bar, requiring proof of vaccination or a recent negative coronavirus test to attend. According to state rules, if all attendees test negative before entering, the maximum audience size increases to 150 people indoors and 500 people outdoors.

For Daisey’s show at the Kraine Theater, which typically seats 99 people, all 22 audience members must be at least two weeks past their final dose of a vaccine (tickets are available for a livestream, as well). Daisey, who hasn’t performed for a live audience since December 2019, said that this requirement was the only way he would put on his act indoors at this stage of the pandemic.

Daisey’s art is extemporaneous monologue, which makes it possible for him to take the stage on the day that restrictions loosen.

“I don’t need to book a rehearsal hall, get a group of actors together, cast them,” Daisey said. “I’m on my own.”

Stand-up comedy is also well-suited: There is no need for multiple people to gather in one room to rehearse. As is “Blindness,” an immersive audio adaptation of José Saramago’s dystopian novel, which opens at the Daryl Roth Theater on Friday and does not include live actors. 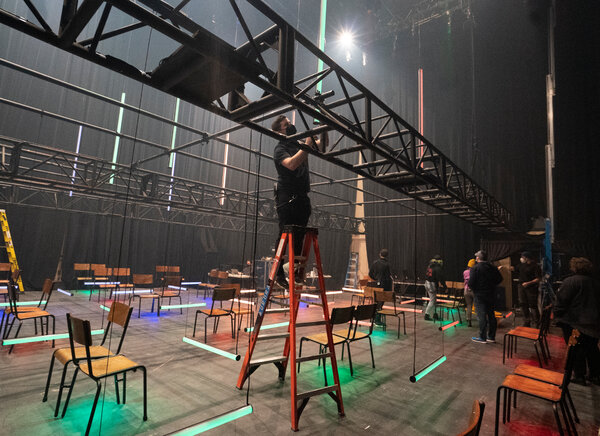 After a yearlong shutdown, preparing shows for an April debut was more difficult for venues like the Joyce Theater, which does not yet have any in-person events announced for the spring, or the Public Theater, which is focused on the return of Shakespeare in the Park in July. The governor announced the new statewide rules on March 3, leaving only a month of planning, so any show that required an extended period of rehearsing or advance booking was unlikely to open on the first weekend in April.

Although theater and club owners have spent the pandemic yearning for the green light from the governor, the level of activity that will be allowed starting on Friday is not sufficient to warrant opening their doors.

For Ron Sturm, the owner of the Iridium jazz club near Times Square, 33 percent capacity is not sustainable, and the club would not reopen unless the rule was set at 50 percent. Because the summer tends to be a slow season for the club, they have decided to reopen shortly after Labor Day. The Village Vanguard also does not plan to open until September.

“I figure, let other people be pioneers,” Sturm said. “For us, it’s more of a wait-and-see posture.”

On the rock scene, Mercury Lounge and Bowery Ballroom will not open until social distancing requirements are eliminated or significantly diminished, said Michael Swier, owner of the venues.

Some New York politicians have been more reticent about the loosening of restrictions, including Jumaane Williams, the city’s public advocate, who urged Cuomo to slow down the process. New York is currently the state with the third highest per capita rates of Covid-19 cases in the country, averaging 42 new cases per 100,000 people in the last week.

There already have been a handful of state-sanctioned ticketed live performances in spaces that Cuomo termed “flex venues,” which are performance spaces without fixed seating that are able to be adapted for social distancing. On Wednesday evening, that program allowed nine dancers to perform a fusion of street dance, ballroom and hip-hop in the lobby of the Guggenheim Museum, as part of the Works and Process bubble residencies. The audience stood along the museum’s white spiral ramp looking down at the stage, distanced from each other by stickers telling them where to stand.

Next week, the openings start to pick up: City Winery is scheduled to host live performances by comedians and musicians again; the Off Broadway show “The Office! A Musical Parody” will return; and, the Brooklyn Academy of Music will present modern dance on ice in Prospect Park.

And in perhaps the most fitting program for the mood of the pandemic, the Park Avenue Armory plans to open a new “interactive and experiential movement piece,” which involves audience members dancing in their own socially distanced spotlight. All 13 performances are sold out.