LONDON — The Theater Royal in Drury Lane — one of London’s most historic venues, tracing its origins back to 1663 — is closing this weekend for a $56 million refurbishment, in part to meet a very immediate need: for more women’s toilets (18, in this case).

The nearby Old Vic will start a $4.1 million project this month that includes adding 12 stalls, while the Queen’s, home of “Les Misérables,” will shutter for a renovation this summer that will include 18 more places for women to use the bathroom.

Last year, a host of Broadway theaters started excavating, annexing, converting and renovating their buildings to remedy the problem of long, slow lines to the bathroom, for men and women. Now many in London are doing or considering the same. They include the Novello, home of “Mamma Mia!,” and the Noël Coward, showing “The Inheritance.”

A British theater publication this week put numbers to anecdotal evidence that going to the bathroom had become a major hassle at the theater.

On Monday, The Stage published a survey of West End theaters that reported they were “caught short by subpar toilet provision.” Female theatergoers would need an hourlong intermission if they were all to make it in and out of the bathroom at an average London theater, according to the Stage report.

Of the theaters surveyed, the National Theater — which had its last major redesign in 2015 — came out on top, with one toilet for every 20 female audience members. But accommodations dropped rapidly from there. The Donmar Warehouse, now showing Lynn Nottage’s Pulitzer Prize-winning “Sweat,” only had one toilet for every 42 female audience members. The Old Vic had one for every 56 women. (The renovation will improve those numbers, an Old Vic spokeswoman said this week.) 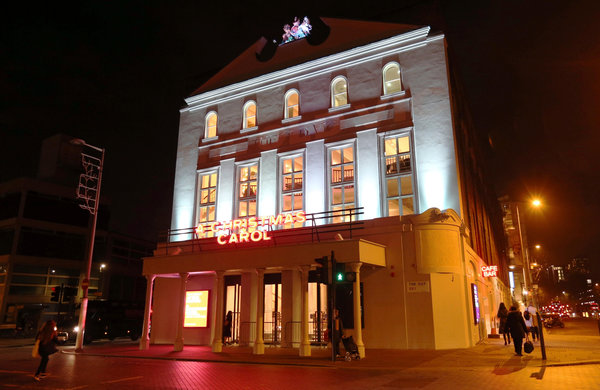 But adding more bathrooms has always been at the forefront of redevelopment plans, she added in a phone interview. “I’ve been coming to the theater since I was a kid and I remember you had a choice of buying a bag of sweets or going to the toilet,” she said. “That shouldn’t be a choice.”

London’s theaters sometimes have problems fitting in more stalls because they are often historically protected buildings that have to comply with a host of planning rules. But Ms. Kane Burton said individual theaters find ways to get more women through by “flipping” men’s toilets to allow women to use them.

A sample of London’s female theatergoers on Wednesday night suggested most are resigned to waiting in line — or finding ways around the traffic.

“I tend to go to the restaurant across the road,” said Mimi Monteith, a playwright having a cigarette outside the Duke of York’s Theater during the intermission for Tennessee Williams’s “Summer and Smoke.”

“Theaters like this are wonderful as they’re so old,” Ms. Monteith added, “and there’s ones where you creep into an almost cupboard to go to the toilet. There’s something that is almost fun about it.”

Should they try adding some portable toilets? “No, that’d be tragic,” she said.

Similar views were found outside the women’s room in the basement of the Old Vic during the intermission of “A Christmas Carol.”

“For the ladies, you always have to queue,” said Tami Alikhani, a child psychologist on a night out with her son. “I’m just grateful to be going to the theater.”

“We were in the pub before this and I got locked in the toilet and had to kick the door down,” she said. The toilet’s door had been lacking a handle on the inside, she said by way of explanation.