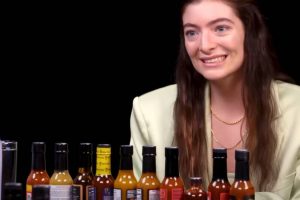 It turns out not even super spicy hot wings can faze Lorde.

The newest episode of First We Feast’s hugely popular interview segment Hot Ones sees the Kiwi pop star take on a series of spicy sauces while answering questions.

As the interview reveals, she’s the first New Zealander to appear on the show, hosted by Sean Evans – and she wowed fans with how well she handled the heat.

It’s the 24-year-old singer’s latest stop on the press round for her long-awaited new album Solar Power, set for release on August 20.

Several minutes into the video, Lorde was still unfazed by the different hot sauces, which usually have celebrities struggling to answer probing questions. A self-confessed foodie, the pop star instead enthused about how delicious a “lunch” it was.

She only struggled with one sauce, rated 135,600 on the Scoville hotness rating, pausing when answering a question about her Antarctica trip.

Lorde is known for her “undercover” Instagram account on which she rates different onion rings. When host Evans asked what her onion ring preferences were, she shared the secret to the perfect recipe.

“I want an onion that has been cut thickly,” she said. “I want a pretty crisp yet thick crust – I want it to have some substance. I guess I’d probably more be into a battered than a crumbed.

“I like a white onion, although I’ve had a few red onion rings that have caught my eye.”

The star also talked about the themes behind her upcoming album Solar Power, due to be released on August 20.

“I basically thought of the album as a sun-worship album,” she said, comparing the album to the colour gold.

“I’m not religious in any way, but my experiences in nature in the last couple years were as close to what I’ve experienced as religion. It was a sort of devotional record for me.”