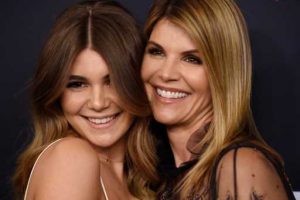 Olivia Jade Giannulli hasn’t left her Dancing With the Stars days behind her because she recruited family members to dance with her in a recent TikTok video. While it was no surprise to see older sister Bella Giannulli joining her, fans were shocked to catch a glimpse of mom Lori Loughlin.

The GAC Family star, who recently returned to acting in the holiday episodes of When Hope Calls: A Country Christmas, was spotted in her youngest daughter’s TikTok video. Olivia Jade had members of her family, excluding dad Mossimo Gianulli, attempt to try Jerkin’, a West Coast hip-hop dance move, while she rated their skills. Olivia Jade gave herself a 10/10 for “doing the moves correctly,” but sister Bella didn’t fare as well getting an 8/10 for being “a little stiff.” It was mom who nailed it from that start. Dressed casually in gray sweats and a plaid flannel shirt with her long hair bopping to the beat, Olivia Jade gave her mom a 100/10 for being “cute af.”

Dad didn’t want to participate but I’d predict he would have gotten a 10/10. Merry Christmas 💚❤️❤️

This Christmas season was a much different one for the family compared to last year. Loughlin was released from prison on Dec. 28, 2020, after serving two months for her role in the college admissions scandal. Mossimo wasn’t released until April 2021, so the family spent much of the holidays apart. Since then, they’ve tried their best to rewrite the narrative after the scathing headlines heralded their privilege that got them caught up in the case in the first place.

Loughlin has returned to acting and Olivia Jade has been hosting a podcast in her post-DWTS life — both returns to public life have been met with mixed reviews, but mom and daughter are moving ahead with their careers. The one thing that, surprisingly, hasn’t been done is a sit-down interview with Loughlin and a major media mogul like Oprah Winfrey, but it’s clear that the actress’ return to the spotlight is being measured out in small does — including her daughter’s TikTok page.