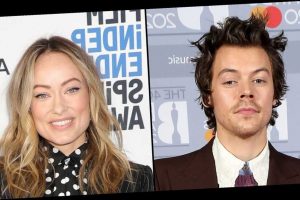 All done! Harry Styles and Olivia Wilde finished filming their movie, Don’t Worry Darling, one month after the news of their relationship broke.

Harry Styles, Olivia Wilde’s Romance: How and When It Began

“That’s a Wrap!” Asif Ali, who also stars in the upcoming psychological thriller, captioned a cast photo uploaded to his Instagram Stories on Sunday, February 14.

In the behind-the-scenes snap, Florence Pugh hugged a crew member while Styles, 27, wrapped his arm around Wilde, 36, and posed alongside their costars Ali, 35, and Nick Kroll as well as screenwriter Katie Silberman. The couple rocked matching white hoodies, which the “Golden” singer layered with a navy New York Yankees bomber jacket.

Wilde directs and stars in Don’t Worry Darling, with Styles and Pugh, 25, leading the cast as an unhappy couple, Jack and Alice, in the 1950s who have a dark secret. The film also stars Chris Pine, Gemma Chan and KiKi Layne.

After filming started in October 2020, the former One Direction member and the Booksmart director got close and eventually started dating. They went public with their relationship in early January while attending his manager Jeffrey Azoff’s wedding, which Styles officiated.

“Harry and Olivia had chemistry almost instantaneously on set,” a source exclusively told Us Weekly at the time. “It was only a matter of time before they got together.”

A second insider, meanwhile, revealed that Wilde’s “intelligence and independent nature were the first things that drew” Styles to her, adding, “Harry likes that Olivia is so driven and confident and smart.”

The timeline of their romance caused some confusion as the actress had announced the end of her seven-year engagement to Jason Sudeikis in November 2020. While one source insisted that Wilde broke things off with the Ted Lasso star, 45, “early last year,” another insider told Us that it happened “after she already had gotten close to Harry.” A third source asserted that Styles “did not break up an engagement.”

Seeing Wilde move on has been tough for Sudeikis, with whom she shares son Otis, 6, and daughter Daisy, 4.

“Jason’s had no option but to step back and let Olivia do her thing, but he [has his fingers crossed] that this is just a phase and that Olivia will snap out of it or that Harry will get bored and move on before too long,” a source exclusively told Us in January. “He’s desperate to [win Wilde back so that they can] repair their family.”

Don’t Worry Darling is expected to be released later this year.