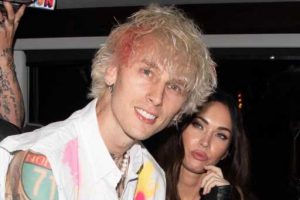 Earlier this week Megan Fox and Machine Gun Kelly sparked engagement rumors when the actress was spotted with a massive diamond ring on their way to SNL rehearsals. And while Fox appears to have denied the engagement on her Instagram by replacing her sparkly ring with one that read “fuck you,” (seemingly a nod to her annoyance with the rumors) the two have never seemed more in love. Case in point: yesterday, as the couple made their way into NBC Studios ahead of Kelly’s performance, the two were swarmed by fans at the entrance; so what did Kelly do? He picked up his beloved and carried her inside the building — who said chivalry is dead?!

Kelly shared the sweet moment on Twitter and wrote, “good afternoon NYC.” The couple can be seen with huge smiles as they make their way into the building and honestly? We love to see it. MGK looks like a true knight and shining armor and we know Fox probably felt so proudly in love as they headed inside.

After the show (and his incredible performance) it appeared as though Kelly was still in a carrying mood that day, except this time the object of his affection wasn’t Fox — it was Pete Davidson! And, well, let’s just say things didn’t go as smoothly as they had gone with Fox earlier that day.

During the end credits, Kelly appears to have excitedly tried to pick up the SNL star but accidentally took a tumble and fell off the stage. The rest of the cast (including host John Krasinski) quickly noticed the two had lost their balance and checked to see if the two were okay. Luckily, they were and they pick themselves up before trying it again; this time with Davidson carrying MGK instead.