Home » Entertainment » ‘Mad Men’ Cast: Where Are They Now?

‘Mad Men’ Cast: Where Are They Now? 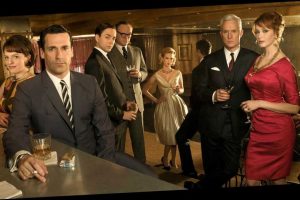 The period drama, which focused on a New York City ad agency in the ‘60s, aired on AMC for seven seasons from July 2007 to May 2015. During that time, the show and its stars won five Golden Globes, 16 Emmy Awards and two Screen Actors Guild Awards.

After the series ended, the cast stayed in touch with each other via text message. “We’re all on a chain. I was actually with [creator] Matt Weiner last night hanging out,” Hendricks exclusively told Us Weekly in October 2019. “The holidays [we] always [have] a big one, where everyone writes in. Someone will sort of instigate one [text], and it’ll go on for, like, two days.”

While the group remains close, the possibility of a revival is far-fetched, according to the actress. “No, everyone’s busy,” she explained.

Hamm agreed in an exclusive interview with Us. “You mean like The Division on Lifetime? Is that what you’re talking about?” he quipped in February 2020 when asked whether he would be interested in rebooting any of his previous projects. “No is the short answer. But I’m glad I was involved with such a wonderful television program and hopefully, I’ll get involved in another one.”

In fact, the actor never even watches old episodes of Mad Men. “No, I watch myself enough, I don’t need to,” he told Us in January 2017. “I don’t sit at home and obsess.”

Hamm added: “It’s always weird. Because inevitably, you’re gonna think something looks terrible. Or is terrible. And unfortunately, it’s the internet that points those things out. Very often, someone online will tell you that it was [terrible], usually behind an anonymous screen name. I try to stay off the internet as it pertains to me.”

The Bridesmaids star and his castmates revealed in April 2015 what they nabbed from the set upon wrapping filming. “I took nothing but memories, and they were delightful, at that,” he told Us at the time. “Most of it was rented, so if I would have taken it, I would literally be stealing.”

Hendricks kept items from her character Joan’s apartment, including a serving tray, a picture and glasses. “Now they’re in my home, and it makes me smile every time I see them,” she noted.

As for John Slattery, he grabbed “the desk lamp from Roger’s office — with permission.”

Scroll through the gallery below to find out what the cast of Mad Men is doing now!