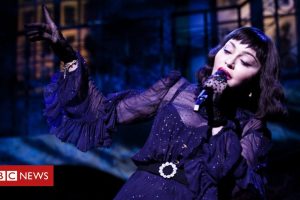 Madonna has resumed her Madame X world tour in London, after cancelling dates in Portugal and the UK due to injury.

The star took to the stage wearing knee supports but otherwise refused to make concessions to the “indescribable” pain she has recently been experiencing.

She performed high kicks, yoga poses and even the splits during a highly-polished, two-and-a-half-hour show.

And she told fans she was “happy to have made it” to the Palladium after scrapping her first UK show on Monday.

“How could I not do a show in London?” she added.

The Palladium seats just 2,286 people – which made Wednesday night’s show Madonna’s smallest-ever full-length concert in the UK; and her first time on the West End since appearing in David Williamson’s Up for Grabs in 2002.

It provided a chance, she said, for a more “intimate and thrilling” artistic experience.

As a result, the audience were required to store mobile phones in sealed pouches as “an intervention for us all”. However, Madonna admitted that even she was getting anxious without a phone nearby.

“I’m having little panic attacks,” she joked. “I’m like, ‘Why is no-one taking my picture?'” 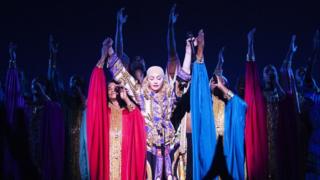 But the gambit worked: Freed from distractions, the audience gave the concert their undiluted attention; while Madonna seemed to relax and have fun without a phalanx of tiny cameras recording her every move.

At one point, she slipped into a British accent and recalled how she’d been ridiculed for developing similarly plummy vowels during her marriage to Guy Ritchie.

“I didn’t know what anyone was talking about until I heard old interviews of myself,” she said. “And then I was horrified and flabbergasted. Why did you let me do that to myself? I’m from Michigan!”

“It’s all Guy Ritchie’s fault,” she decided. “He made me to it.” (Perhaps because of the theatre setting, the crowd booed her ex like a pantomime villain).

The off-the-cuff banter made Madonna, who’s often been perceived as imperious and stand-offish, seem refreshingly accessible. But that looseness was often at odds with the heavily-conceptualised musical segments.

The heart of the show had to do with Madonna’s life in Lisbon, where she moved in 2017 to support her son David’s aspirations as a footballer (“yes, I’m a soccer mom,” she accepted).

Uprooting the family wasn’t easy, she said, and she struggled with loneliness until David gave her an ultimatum: “You’re pathetic, you’re chubby and you need some friends.”

In Madonna’s retelling, she found friendship and sustenance in Portugal’s fado clubs, where “I took my loneliness and turned it into something good”.

Traditional music percolated the show: Madonna rebuilt Isla Bonita in a fado style and covered Isabel De Oliveira’s Fado Pechincha. During Batuka, she introduced the Orquestra Batukadeiras – a group of female hand-drummers from Cape Verde – one of whom danced with a bottle of rum balanced delicately on her head.

But Madonna being Madonna, there were also dancers in gas masks, nuns playing cellos, cameos from her children (NB: very cute) and urgent messages about school shootings and climate change.

Thematically, it was supposedly tied together by the character of Madame X, a secret agent / prisoner / cabaret singer / cha cha instructor / equestrian / prostitute – but the concept never quite gelled.

Instead, music was the unifying force – from the feel-good throwbacks of Vogue and Like A Prayer to more recent tracks like the gospel-infused Come Alive and I Don’t Search I Find, which updates the deep house grooves of the Erotica era.

Fans attending the star’s 13 remaining London shows will be pleased to learn she arrived on stage within 20 minutes of the advertised starting time, in contrast to the US leg of the tour, where audiences were often kept waiting for several hours.

“I’ve been warned by Westminster council,” she confessed, adding that an “iron curtain” would fall over the production if she broke an 11pm curfew.

However, there will be lingering fears over the star’s health, and the fate of future shows.

So far, 10 of the tour’s 93 dates have been called off after the star was ordered to “step back” from performing by doctors.

“I have injuries that have plagued me since the beginning of the tour but I must always listen to my body and put my health first,” she wrote on Instagram over the weekend, after cancelling the opening date of her residency at the Palladium.

Although she seemed in good spirits on Wednesday night’s show, Madonna did admit things were “not good in the knee and the hips”.

But she also made light of the injuries, after asking for a chair to be brought on stage during one of her monologues.

“Normally, I kneel for about 20 minutes here,” she said, a gleam entering her eye.