Of all the formats native to television, the late-night talk show may be the one most bound to the structure and conventions of old-fashioned TV. You switch on a specific channel at a specific time; you have a standing date to watch a host talk to interesting stars (or make boring stars interesting); you go to bed.

So the genre has had an especially tough time adjusting to an era where the TV channel is just one media pathway among many. Who needs a late-night chat with the stars when stars are available on Instagram and Twitter, 24/7 and without intermediation? What is “late-night” talk on a streaming platform, where, as on a casino floor, neither day nor night exist?

I’m not sure anyone really knows the answer, which is why, even as talk shows have multiplied in recent years, many have struggled.

But the attempt to figure it out is the most interesting thing about “Busy Tonight,” Sundays through Wednesdays on E!, and “Patriot Act with Hasan Minhaj,” Sundays on Netflix. Each is adapting an appointment-TV staple to a phone-scrolling, binge-watching era in a different way.

“Busy Tonight,” with the actress and author Busy Philipps, is essentially an answer to the question “What if Instagram were a TV show?” I don’t mean that facetiously. Philipps got the show partly on the strength of her popular Instagram feed, clips from which appear in the credits, festooned with emoji and a cloud of hearts that connote Like, Like, Like.

I do like Busy Philipps, and that’s pretty much the price of admission to “Busy Tonight.” Where other new talk shows often work to introduce the host, this one assumes you’re already a follower, and even consider yourself a virtual pal.

There’s no desk; Philipps curls up on the couch, a fellow pop culture junkie sitting down for a night’s TV with you. (“Are you eating your kids’ candy?” she asked on Halloween night. “Are you stealing it and filming it for Jimmy Kimmel?”)

“Busy Tonight” is a quick half-hour: a round of chat (Philipps uses a trio of her writers as a Greek-chorus collective sidekick), a field piece and a celebrity interview. Philipps is, like Jimmy Fallon but in a different way, an audience surrogate, a fellow fan. She’s not out to pry into her guests but to hang with them. The show is, the cruelly earworm-y theme song reminds you, about “Me and my friends.”

Each segment speaks the Instagrammar of enthusiasm. Philipps, in one of her favorite words, is “obsessed” with lots of things: Steven Tyler, babies, her aunt, the way Vanessa Hudgens tosses her neck in SoulCycle class.

[Read about how Philipps has capitalized on her Instagram clout.]

Philipps mainly steered clear of politics her first week, something that used to be standard in late night. But there was some personal-as-political — underscoring how women are still underrepresented in late night — when she used a graphically funny ramble about menstruation to speak out on a Nevada ballot initiative to repeal the “tampon tax” on feminine hygiene products: “Poverty is sexist.”

The early question for “Busy Tonight” is whether TV — a stage in your living room — can reproduce the intimacy of a medium you hold in your hand. Philipps’ Instagram stands out partly for its approachable ordinariness, an effect that dissipates when you’re spending half a show talking with celebrities.

But Philipps works to connect, ending each episode pouring a margarita, putting on a nightgown — “Mr. Nightgown,” she calls it — singing a good-night song and saying “I love you” directly to the camera.

“Was that just weird?” she said, laughing, during her final signoff of the week. Not necessarily. But it’s definitely more personal than Johnny Carson ever tried to get. 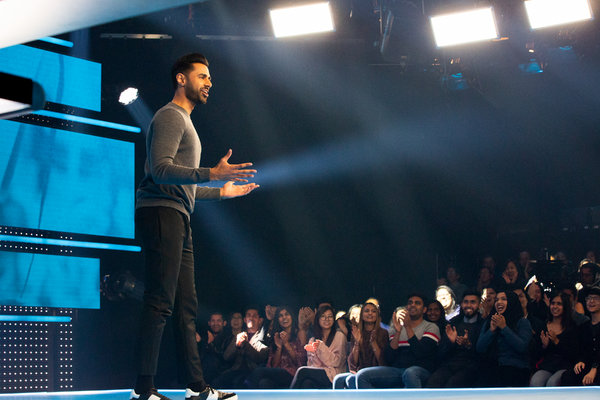 “Patriot Act” has a different challenge: to make the talk show work on Netflix, despite a dearth of evidence that binge-watchers want it. The streaming outlet has canceled attempts by Chelsea Handler, Joel McHale and Michelle Wolf, while Norm Macdonald and even David Letterman made scarcely a ripple in the vast ocean of binge.

Minhaj’s show is modeled less on classical late-night than the thinkpiece-with-jokes format of his fellow “Daily Show” alumnus, John Oliver. Like Oliver’s “Last Week Tonight,” Minhaj’s show is “talk” only in the sense that, yes, someone is talking the whole time.

The first thing you notice on “Patriot Act” is the stage, an alien mother ship of blazing light and geometry that looks, Minhaj pre-emptively jokes, “like Michael Bay directed a PowerPoint presentation.” The second is Minhaj himself, jittery and pacing, seeming to absorb energy from the jillion-watt setting, his legs spring-loaded.

There is no shortage of news-junkie comics, armed with research and graphics, cracking wise from the left these days. Minhaj’s first two episodes leaned into one thing that sets him apart, his background as a Muslim Indian American and the child of immigrants.

His first topic was a recent lawsuit against Harvard’s affirmative-action policy, which seeks to advance a longtime complaint of white activists by leveraging complaints that Asian-Americans have been discriminated against.

It’s a subject that’s, literally, more than black and white: It involves pitting minority groups against one another, using historical concerns for manipulative ends. Minhaj, bounding between history and pop-culture references, was able to approach the issue as an insider, playing on stereotypes that would be radioactive coming from an outsider. Citing statistics showing that Asian-Americans make up 5.8 percent of the population but over 22 percent of Harvard’s class of 2021, he added: “But in classic Asian-parent fashion, we’re like, ’Twenty-two percent? Why not a hundred percent?’”

Befitting its first topic, “Patriot Act” is an example of how hiring talk show hosts other than only white men isn’t just fair; it gives home viewers perspectives, and thus comedy, they wouldn’t get otherwise. (It also represents the audience differently; the studio, in Minhaj’s opening shows, was filled with fans of South Asian descent.) The second episode, pegged to the killing of the journalist Jamal Khashoggi, was an overview of Saudi Arabian politics, with detours to critique Indian-American conservatives and the aesthetics of Saudi rap videos.

“Patriot Act” has a tense, eager vibe, like a student cramming 40-minutes’ worth of research into a 20-minute presentation. But it’s possible that its format — essentially a short, civics lesson standup act — might ultimately translate better to streaming TV, where people binge on serials but graze at their leisure on episodic nonfiction shows like “Queer Eye” or “Salt Fat Acid Heat.”

Minhaj’s early topic selection is similar to Oliver’s: drawn from the news but not too perishable. I tend to store “Last Week Tonight” on my DVR, and usually the segments hold up just as well a week or more later.

If “Patriot Act” can find this sweet spot — urgent but not immediate — it may be a better fit for streaming TV, where you can talk as much as you want, but people don’t listen until they’re ready.