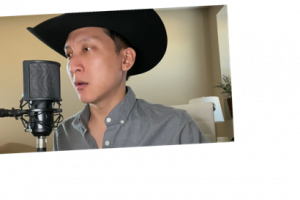 Sure, Cardi B and Megan Thee Stallion’s sexy summer smash “WAP” is one of the hottest songs in the country, but how would it sound as a country song?

Travis Yee recently recorded a version of the raunchy rap song to the tune of Garth Brooks’ country classic “The Dance.”

And it’s awesome! Who knew that lyrics like “Make it drop/ Like a bucket and a mop/ Macaroni in a pot/ I’m talking WAP, WAP, WAP” sounded so soulful, so heartfelt, when sung in a country drawl?

“One couple asked me for an MP3 because they wanted it to be the first song at their wedding,” Yee said. “They promised to send a video.”

Yee, a web designer originally from San Francisco, got the country bug 15 years ago while driving to the San Diego Comic-Con.

“My iPod failed and all that was on the radio was country music,” Yee, 35, told HuffPost. “I wasn’t going to go without music so I listened and ended up singing along to the Zac Brown Band.”

That led to a love of country music, which he admits surprised some people, considering his Asian heritage. Still, he says the reaction to his music has been mostly positive.

“People say they appreciate somebody who doesn’t look like the typical country artist,” he said.

Although his debut single, “Everything But Country,” debuts on Spotify next month, Yee has been recording quirky covers on TikTok to build his brand and showcase his personality.

Yee, who said he sometimes doubts his talent, received praise from Brooks himself for an earlier video.

“He liked my singing, but thought I looked young and told me to stay in school if that was the case,” Yee said.

No word on whether Cardi B and Megan Thee Stallion have heard Yee’s country cover, but it appears below.

END_OF_DOCUMENT_TOKEN_TO_BE_REPLACED

END_OF_DOCUMENT_TOKEN_TO_BE_REPLACED
We and our partners use cookies on this site to improve our service, perform analytics, personalize advertising, measure advertising performance, and remember website preferences.Ok