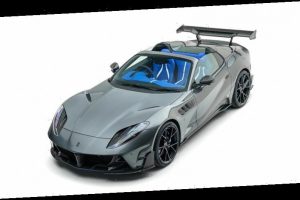 Luxury automotive tuning company Mansory is well-known for its reworked supercars, and its latest offering is once again not a car for those looking to be subtle. Welcome to the Mansory “Stallone” GTS, the company’s take on the Ferrari 812 GTS supercar.

In true Mansory form, the “Stallone” has been fitted with a complete and comprehensive visual overhaul, seeing the front end become angular and pointy, the side skirts gain a lot of width, and the rear appear more aggressive thanks to a new diffuser and a colossal rear wing.

A new set of 21×9.5 front and 22×12-inch rear wheels make the “Stallone” look hunkered down as if its hugging the ground, while a splitter with canards, more canards on the diffuser, and aerodynamically-developed wing mirrors feature grooves on them add to the car’s menacing prowess. All of these carbon fiber elements are offset by a signature Mansory “Daytona Grey” paint job, as well as the unmissable blue-and-white leather interior.

Last but by no means least is the “Stallone’s” power upgrades. The naturally-aspirated 6.5-liter V12 engine has been upgraded with an ECU tweak and a sports exhaust system, resulting in 830 HP and 546 lb-ft of torque which is good for 0-62 MPH in 2.8 seconds and a top speed of 214 MPH.

Take a look at the Mansory “Stallone” Ferrari 812 GTS above, and find out more information on Mansory’s website.

Elsewhere in the automotive world, Wheelsandmore has given the Mercedes-AMG GT Black Series a considerable visual and power enhancement.
Source: Read Full Article