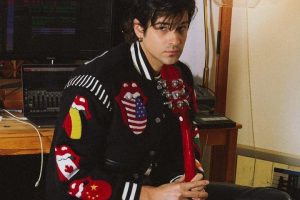 Following the duo’s inaugural drop-off in March, MARKET and The Rolling Stones have returned with a second collaborative delivery — this time, the band’s legendary tongue logo decorates a collection of would-be merch for a world tour. In partnership with Bravado, the 360-degree merchandise company behind the English rockers, MARKET dreamt up six apparel items, a snapback hat and an emblematic basketball to celebrate The Rolling Stones’ 60th anniversary.

The honorary range marks the latest effort in MARKET’s investigative pop cultural series, which has also included team-ups with the likes of Guns N’ Roses, Looney Tunes, My Chemical Romance and The Beatles. Inside the collection, a varsity jacket featuring custom chenille patches takes centerstage, with global tongue art covering the entire silhouette. Long-sleeve T-shirts sport similar logo work down their arms and backs, while one T-shirt fronts a singular prickled tongue icon on its front. Rounding out the range, another short-sleeve takes the classic graphic band T-shirt approach with dual iconography, and a sweater tastefully yells superfan with a massive spiked tongue.

“No one does it quite like The Rolling Stones, and we were incredibly excited to get to work with them for a second time,” said MARKET Creative Director and Founder, Mike Cherman. “The Stones are known for making waves, so we infused the tongue logo with flags from across the globe to honor the everlasting impact that they’ve made. The hero piece is definitely the varsity jacket – we wanted to make the pinnacle version of a World Tour Rolling Stones jacket, and I think we were successful in truly honoring the global effect that they’ve had.”

The limited-edition collection is now available on MARKET’s website, with prices ranging from $45 USD to $300 USD. Take a look at the collaboration in the gallery above.