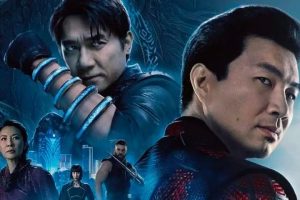 Marvel Studios has debuted a brand new trailer for its highly-anticipated film Shang-Chi and the Legend of the Ten Rings, soundtracked to DJ Snake, Rick Ross and Rich Brian‘s upcoming collaboration, “Run It.”

The newest visual spotlights the long-running friendship between Katy (Awkwafina) and the titular hero (Simu Liu) as she finds out about Shang-Chi’s past and family ties. It also previews Shang-Chi’s return to the Ten Rings organizations and seeing his father, Wenwu (Tony Leung) — who replaced the original character of Fu Manchu due to its racist stereotypes — and his aunt, Jiang Nan (Michelle Yeoh).

The trailer and promotion for “Run It” arrives just after Swae Lee and Jhené Aiko linked up for the soundtrack cut, “In The Dark.” First reactions for Shang-Chi recently hit social media, with many praising the effort prior to its wide release on September 3.

Watch the full trailer above and stay tuned for an official release date for “Run It.”