Home » Medicom Toy Brings Back the Original 'Godzilla' from 1954

Medicom Toy Brings Back the Original 'Godzilla' from 1954 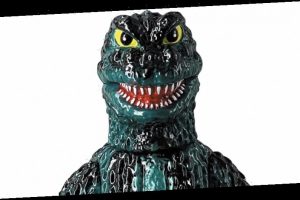 Medicom Toy has brought back a nostalgic form of Godzilla which harkens all the way back to the franchise’s first 1954 film. Directed by Ishirō Honda and distributed by Toho Studios, the film introduced Godzilla as a giant monster whose attacks had implications for global nuclear warfare during post-war Japan. The film was a massive success and continues to inform the franchise’s legacy.

Dubbed “Destroy All Monsters,” Medicom Toy’s depiction of Godzilla is a glossy vinyl figure with a dark green tint. Staying faithful to Godzilla’s appearance in the ’50s film, the figure features three rows of spikey dorsal plates running down its back. It comes with bright yellow eyes and a red mouth with sharp white teeth. The figure has been made to stand in an upright posture supported by two large, stalky legs.