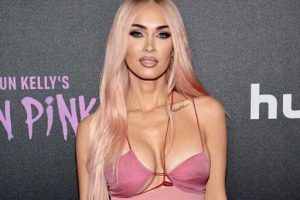 Megan Fox is at it again with the self-deprecating jokes.

Sharing a few snaps of her sultry Milan Fashion Week outfit on Instagram, Fox captioned the post “Guys you don’t understand it’s just like…really hard when the only thing anyone ever notices about you is how smart you are.”

Although she’s been oversexualized by the public since she started working in Hollywood as a teenager, Fox is likely referring to the wave of speculation that she had a boob job after sharing a few snaps of her disco-themed costume for Beyoncé’s 41st birthday party. While there’s no shame in Fox potentially having had her tatas treated to a little TLC — we love bodily autonomy — there is shame in the public’s brazen commentary about Fox’s breasts.

Among the nearly 13,000 comments left on her party post, an overwhelming majority of them were in relation to her chest. One person cryptically wrote, “They’re new,” while others said “Tots got bigger,” “She get her boobs done??,” “Did…. did she get her t*ts done???,” “Looks like the theme was cheap hooker,” and more of the same bold comments that these people would likely never say to Fox’s face.

The anonymity of the internet creates an unparalleled audacity in people, and Fox pointed it out with the subtle dig in her latest post caption.

At the end of the day, Fox is no stranger to being subjected to gross commentary about her body. She’s no doubt developed a thick skin when it comes to her body being analyzed by the public because she continues to share saucy snaps, and we suspect it’s because she’s comfortable with the power of her femininity and sexuality — and we love that for her.

Fox showed that, contrary to popular belief, she truly is extremely intelligent and thoughtful, adding an excerpt from Joseph Campbell and Bill Moyers’s The Power of Myth
to the end of her fashion week post. She highlighted one line in particular, which reads, “One of the many distinctions between the celebrity and the hero… is that one lives only for the self while the other acts to redeem society.” Talk about a brainy mic drop from a notoriously underestimated woman.

Before you go, click here for more celebrities who’ve spoken out about being body-shamed.