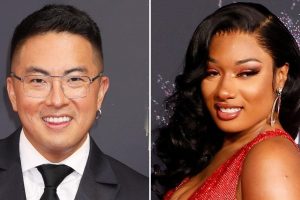 Megan Thee Stallion is making her big screen debut! On Feb. 17, A24 announced that its first musical movie, “F*cking Identical Twins,” is officially in production with a star-studded cast, including Emmy-nominated “Saturday Night Live” star Bowen Yang, according to The Hollywood Reporter. The R-rated musical comedy, described as a “subversive” spin on “The Parent Trap,” is based on the two-man stage show premiered by Aaron Jackson and Josh Sharp — who are writers for the film and former costars on “The Opposition with Jordan Klepper” — at the 2014 Upright Citizens Brigade.

The film — overseen by musical director Fiora Cutler — will feature Marius de Vries, whose credits include “La La Land,” “Moulin Rouge,” and “Coda,” as executive music producer and include original songs by Jackson, Sharp, and Karl Saint Lucy. Find out more about the “F*cking Identical Twins” musical ahead.

What Is “F*cking Identical Twins” About?