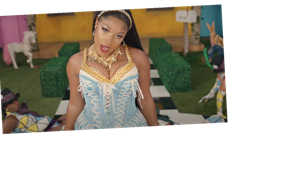 Somewhere in a faraway land, Megan Thee Stallion is dressed in whimsical garb and twerking to her heart’s content alongside Young Thug. At least, that’s what happens in the music video for their new song, “Don’t Stop.” The clip shows Megan rapping in a real-life Wonderland while rocking a handful of sexy, playful looks, including a pink and purple striped latex bodysuit complemented by a pigtail updo that makes her look like the Cheshire Cat — which is pretty meta considering an animated version of the cat appears in the video itself, alongside colorful sets, fierce dance sequences, and the prettiest rocking horse we’ve ever seen. Watch the visuals for “Don’t Stop” above, then check out some of Hot Girl Meg’s best bops.