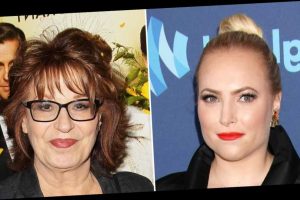 A tough return. Meghan McCain returned to The View on January 4 after her three-month maternity leave and it wasn’t exactly smooth sailing.

“It’s been such a rough reentry back into The View,” McCain, 36, said during the Monday, January 11, episode of Watch What Happens Live With Andy Cohen. “I had a really hard birth … I had a really hard time getting back to work. I thought I’d be back by the election. So just, like, that process of getting back was a lot, and this past week back, with just the show the way it is and obviously everything going on in the country and the horrible, horrific attack on our Capitol — it’s just been a lot.”

From Joy to Whoopi, Every ‘The View’ Cohost Since the 1997 Premiere

The former Joy Behar Show host fired back, “I did not. I did not miss you. Zero.” At the time, McCain called her comments “so nasty” and “so rude,” but moderator Whoopi Goldberg cut them out.

The Biggest Talk Show Controversies and Feuds Ever

On Monday night, McCain revealed that she “missed everyone” on the show when she was away, despite their discussions becoming heated. “Even if some people didn’t miss me, I missed the show, we’re a family. All these women were at my dad’s funeral. We’ve been through a lot of s–t together, and I missed being on the show,” the Dirty Sexy Politics author said. “I hope that we can all be examples, myself included, of where the country should go forward. Because whether we like it or not, I’m not going anywhere on the show, Joy’s not going anywhere on the show — we all have to live and coexist with each other, just like Americans right now, which is a little deep for an answer, but we’re all gonna try to coexist and I really wanna have us all move forward.”

McCain and husband Ben Domenech welcomed daughter Liberty Sage in September 2020. “Motherhood is euphoria,” the political commentator wrote via Instagram at the time. “All of the cliches have come true and exceeded well beyond my wildest expectations. It is hands down the best thing I have ever done in my entire life and I am completely in awe of our daughter.”