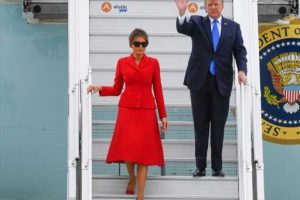 While Melania Trump has never acknowledged husband Donald Trump’s reported affairs publicly, she has addressed them behind the scenes, according to her former chief of staff, Stephanie Grisham. In the recently published memoir, I’ll Take Your Questions Now: What I Saw at the Trump White House, she alleges that Melania referenced another famous presidential scandal when news broke about the reported payoff of Donald’s mistress and former Playboy model Karen McDougal.

“The news hit on a Friday,” Grisham recalls in an excerpt obtained by SheKnows, “when we were planning to leave for Florida. I hadn’t even called Mrs. Trump to speak to her about the story before I received a call from her to let me know that she wanted to drive to Air Force One ahead of her husband.” Melania was responding to journalist Ronan Farrow’s New Yorker story that discussed McDougal’s interview with The National Enquirer, for which she was paid $150,000 in August 2016, to discuss her year-long affair with the president a decade earlier. The publication purposely bought the exclusive rights to her story so they could protect Donald and never let it see the light of day.

That’s when Melania dug into the presidential scandal history books and made reference to former First Lady Hillary Clinton — she didn’t want that same image haunting her. Grisham writes, “She surprised me, saying “I do not want to be like Hillary Clinton, do you understand what I mean? She walked to Marine One holding hands with her husband after the Monica news and it did not look good,” referring to Monica Lewinsky.” Melania didn’t want to support Donald at that moment and she certainly didn’t want the political photographers capturing it for publications around the globe.

While the news about the former president’s alleged affairs continues to haunt him, Melania can more easily dodge the news since the couple is out of the White House. She continues to keep a low profile and enjoy her Floridian life away from the prying eyes of the press — and her husband’s reported indiscretions.