That’s Japan on your left. The first thing you may notice, inside a glass case filled with musical instruments, is the eighth-century koto, a long, low instrument with strings sometimes played while sitting on the floor. Southeast Asia is on your right. What looks like a small crocodile is a 19th-century mi-gyaung, or crocodile zither, from Myanmar (when it was Burma).

This is Gallery 681, “Mapping the Art of Music,” an intimate second-floor space at the Metropolitan Museum of Art in New York, which opened last month after a three-year makeover. (An exhibition of non-Western instruments was here before.)

“We still have a lot of questions about the origins of music,” said Bradley Strauchen-Scherer, an associate curator who oversaw the new gallery’s creation — and a French horn player since her middle school days in Connecticut. But the new gallery, she said, sheds considerable light on music’s travels.

“It sets up these really wonderful juxtapositions, how these different places have talked to each other, traded with each other,” said Ms. Strauchen-Scherer, who joined the Met seven years ago after almost two decades as a curator in London. 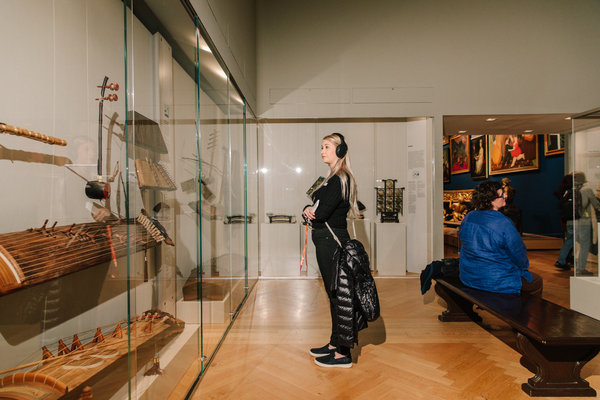 There are some 250 instruments in the new gallery, the oldest a terra cotta trumpet (circa 200 B.C.-A.D. 400) in the shape of a jaguar. It’s from the Moche civilization in what is now northern Peru. The jaguar sits next to a couple of 11th- to 15th-century Peruvian “whistling jars.” Anyone who ever created musical notes as a child by blowing across the top of a glass soda bottle will get the idea.

One of the newest objects here — although it looks far from contemporary — is an akonting (circa 2000), a traditional West African stringed instrument that served as a forerunner of the banjo. And while enslaved Africans may not have carried their instruments across the Atlantic Ocean, nothing could take away their musical influences.

“Instruments survive,” Ms. Strauchen-Scherer said. “That’s why we spend so much time studying them.” But the imports, she said, were just as much in the hearts, minds and memories of the people crossing borders over the centuries: tradesmen, immigrants, soldiers, explorers and prisoners.

The research that went into the new gallery’s development did not reveal one single geographic origin of all music. What it demonstrated was to what extent people all over the planet were discovering a lot of the same things simultaneously.

One enormous influence was the Silk Road, the trade route that connected East and West for some 1,500 years and the later Triangular Trade, among North America, Europe and Africa.

Music galleries need music, of course, and the exhibition includes some 80 audio clips. Visitors can even enjoy free audio guides on Bose headphones, if they arrive from 1 p.m. to 4 p.m. There’s also a small concert stage with state-of-the-art sound equipment.

A number of musical selections from the featured instruments are also on the museum’s website. There are demonstrations of the morin khuur of Mongolia, the tanbur panj simi and the shakuhachi. One of the more familiar selections is “Yankee Doodle Dandy,” played on a Brooklyn-made hand-crank-operated barrel piano like the ones that street musicians carried or wheeled down city walkways in the mid-19th century.

But the new gallery is an enthusiastically visual experience too. “We celebrate instruments as works of art,” Ms. Strauchen-Scherer said.

The Japanese odaiko (1873), for instance, is an ornate cloisonné and enamel drum with lacquerwork dragons on the skins. The Mexican seven-course guitar (guitarra séptima, 1880) has geometric patterns and floral designs in spruce, rosewood and inlaid mother-of-pearl.

On top of that, Gallery 681 has borrowed pieces of art from elsewhere in the museum and hung them above Michele Todini’s gilded mid-1600s Italian harpsichord. One standout is Fernando Botero’s “Dancing in Colombia” (1980), an almost nine-feet-wide oil showing sizable musicians in bowler hats.

The opening of “Mapping the Art of Music” completes the museum’s André Mertens Galleries for Musical Instruments. It sits just beyond the section’s other large gallery, “The Art of Music Through Time,” which reopened last year.

Gallery 681 isn’t necessarily easy to find. Visitors take the glass elevator in the first-floor American Wing to the second floor and look for the frosted glass doors on the east balcony. When they see the massive 1830 Thomas Appleton pipe organ, they’ve arrived.