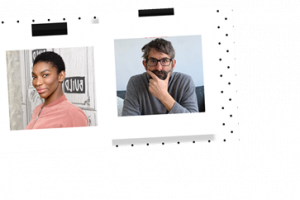 What happens when two TV icons come together on a podcast?

We recently discovered the answer when Michaela Coel appeared on the second season of Grounded With Louis Theroux. In the fascinating chat, Coel covered everything from religion to dealing with the success of I May Destroy You and the importance of talking honestly about race. She also talked about her family and growing up with separated parents, a lot of listeners related to.

Now, in a bonus episode of the podcast series, the tables have been turned, and Theroux finds himself answering questions that his previous guests have for him – including Coel.

“I wonder are you ever curious about making a fiction?” Coel asks. “Is there a TV show or film or fictional book inside of you? What’s stopping you?”

It’s an excellent question, right? We know and love Theroux for his brilliant documentaries, memoirs and podcast interviews, but we’d 100% be interested in any piece of fictional work penned by him.

“I like that. She’s hit me in quite a tender spot because there’s actually a part of me that does nurture a dream of writing something, whether it would be a novel or a TV series, a drama or some kind of film,” Theroux replies.

“What you get with fiction is an ability to touch on subjects where the vulnerability, the sensitivity and the extremity is such that [with] a documentary you would worry about duty of care…

“For example, stories about strange predatory people or the dynamics of how criminal behaviour takes place, or how vulnerable people are exploited, I’m making it sound like a bundle of laughs, like I’m going to write the most hideous book or film.”

Theroux continues: “But, you know, whether it’s Jimmy Savile’s victims or what happened in Rotherham and elsewhere, they’re very hard to tell fully and deeply in [a] documentary because the people involved don’t always want to talk about it or share their reality and documentary makers for that reason.

He adds: “And what is stopping me is the fact that actually maybe, I think I wouldn’t be that good at it. There’s 20 or even 100 writers, Russell T Davies, Michaela herself and many others who perhaps could write that better than me and it’s a big, it’s a big risk. But it’s something I should, I don’t know, maybe think about.”

Theroux also answers questions from people including Frankie Boyle, Rylan, Jon Ronson and KSI. He talks about how he “keeps things amicable”, his favourite songs of 2020 and making a documentary about himself.

You can listen to the full episode of Grounded With Louis Theroux on BBC Sounds.