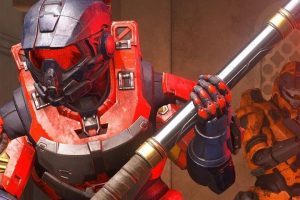 During its E3 showcase on Sunday, Microsoft unveiled a first look at Halo Infinite‘s free-to-play multiplayer mode, set to arrive on Xbox and PC during the upcoming holiday season.

For the new visual, developer 343 Industries calls on signature Halo gameplay experiences, including famous voiceovers for “doublekill” and “capture the flag” as well as recognizable landscapes and weapons, while also introducing the franchise’s next era.

“Our goal is to deliver a multiplayer experience that honors classic Halo combat while also offering new players the support needed to jump in and have a great time,” says Joseph Staten, head of creative for Halo Infinite, in a statement. “To that end, we’re introducing the Spartan Academy and Spartan Commander Laurette who will help players familiarize themselves with maps, weapons, and equipment.”

Additionally, a multitude of Spartan customization options will be available in Halo Infinite‘s season one, “Heroes of Reach,” including a Yoroi armor that can be unlocked for free by playing events. Staten also said that the updated gameplay will include bot matches, so that players can sharpen their combat skills before entering the battlefield.

Xbox has confirmed that it will reveal another multiplayer trailer for Halo Infinite this week, followed by a breakdown of the new gameplay with the game’s executive design team during Xbox Game Showcase: Extended on Thursday, June 17.