Home » Entertainment » "Midnight Navy" Touches Down On the Air Jordan 11

"Midnight Navy" Touches Down On the Air Jordan 11 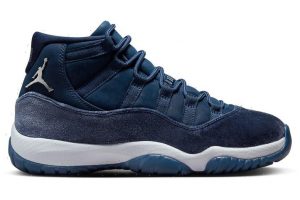 A relatively quiet year for the Air Jordan 11, 2022 has offered a short list of looks for the sneaker, including a high-top version of 2016’s Air Jordan 11 Low “Cherry.” However, Jordan Brand has more in store for the sneaker world as a new “Midnight Navy” colorway has officially been revealed. Landing in women’s sizing, the pair joins this month’s Air Jordan 4 “Canyon Purple” in the brand’s latest women’s exclusive Air Jordan releases.

First rumored to release in March, the “Midnight Navy” equipped Air Jordan 11 is presented in a look that swaps the silhouette’s traditional patent leather mudguards for a velvet one. Its signature shade of blue spans the entire upper, save for the silver branding elements such as the shoe’s Jumpman hardware on the lateral. Above the mudguard, a nubuck upper also pops up alongside a leather tongue. The remainder of the sneaker sticks to the 11’s standard look, including its sole unit which favors white at the midsole and navy at the rubber outsole.

Look for the Air Jordan 11 “Midnight Navy” to launch November 25 in women’s sizing via Nike and select Jordan Brand retailers worldwide at a price of $225 USD.