Mike Tyson vs. Evander Holyfield III Has Been Confirmed 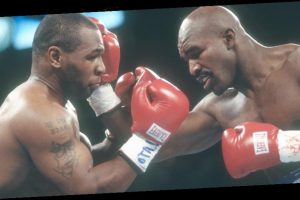 After some back-and-forth, to which Evander Holyfield‘s team allegedly pulled out of negotiations 24 hours ago, Mike Tyson has confirmed that the fight is happening. Appearing on Instagram live with Haute Living, Tyson confirmed saying, “I just want everybody to know the fight is on with me and Holyfield. Holyfield’s a humble man I know that and he’s a man of God, but I’m God’s man. Listen, I’m going to be successful May 29.”

Originally, the exhibition match was canceled as it was reported that Tyson’s camp was asking for $25 million USD and other “demands” that became “untenable” which ultimately led to the falling apart of the promotion. Whatever changed in the deal has not yet been made public but boxing fans are sure to be excited about this trilogy match. The last time these two competed against each other was in the rematch of 1997, often referred to as “The Bite Fight” as Tyson ended up biting a piece off of Holyfield’s ear during a clinch.

Tyson, at 54 years of age, last fought in November against Roy Jones Jr. while the 58-year-old Evander Holyfield’s last professional fight was in 2011. This fight is expected to take place on May 29 at the Hard Rock Stadium in Miami.