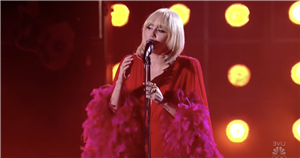 New year, new music! Miley Cyrus performed a brand-new song titled “You” during her highly anticipated New Year’s Eve special. Toward the end of Cyrus’s electrifying set in front of a fully-vaccinated crowd in Miami, she debuted the emotional piano-driven ballad, which excited fans, who wondered why it wasn’t on Spotify. “This song is so new I haven’t even recorded it yet,” she replied on social media. “Just wanted to do something special for YOU all!” With lyrics vulnerable enough to double as wedding vows, the tune was special indeed! “I got some baggage / Let’s do some damage / I am not made for no horsey and carriage / You know I’m savage / You’re looking past it / I want that late night sweet magic / That forever lasting love / But only if it’s with you,” she sang. Watch the full performance above.

The two-time Grammy nominee also delivered flawless covers of Blondie’s “Heart of Glass” and Dolly Parton’s “Jolene” as well as shared the stage with Brandi Carlile, Saweetie, 24Goldn, and cohost Pete Davidson. One of the most-talked-about moments of the night came when Cyrus handled a wardrobe malfunction like a pro during a performance of “Party in the U.S.A.” “Everybody’s definitely looking at me now,” the 29-year-old singer quipped, referencing the song’s “Everybody’s lookin’ at me now / Like, ‘Who’s that chick that’s rockin’ kicks? She gotta be from out of town'” lyrics. She joked, “I’m still in the most clothes that I’ve ever worn on stage.” Ahead, check out some of the best moments from Miley’s New Year’s Eve Party.

Miley Cyrus and Brandi Carlile Perform “The Story” and “The Climb”