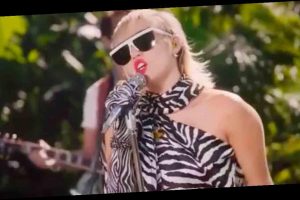 You got me in a crazy position. If you’re on a mission. You got my permission. 💀@britneyspears @mtv #BackyardSessions #Unplugged

Miley Cyrus is reviving her Backyard Sessions for a special episode of MTV’s Unplugged series. On Thursday, the 27-year-old singer gave a sneak peek of what’s to come with a clip of her singing Britney Spears’s “Gimme More.” The rest of the mini concert is set to include her hit songs like “Midnight Sky” as well as a few covers by Pearl Jam and the Cardigans. Honestly, her rendition of “Gimme More” literally has us craving more.

Whenever Cyrus covers a song, she always manages to make it completely her own. Some of her previous Backyard Sessions included a cover of “Don’t Dream It’s Over” with Ariana Grande in 2015 as well as her iconic cover of “Jolene” by her godmother Dolly Parton in 2012, so there’s no telling what other surprises she has in store. Watch a sneak peek at her performance above!

END_OF_DOCUMENT_TOKEN_TO_BE_REPLACED

END_OF_DOCUMENT_TOKEN_TO_BE_REPLACED
We and our partners use cookies on this site to improve our service, perform analytics, personalize advertising, measure advertising performance, and remember website preferences.Ok