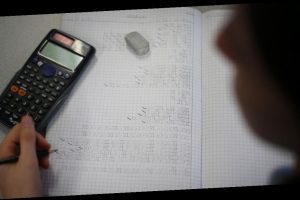 If you consider yourself somewhat of a mathematics whizz, then boy have we got an equation for you.

Thousands of Twitter users across the globe have been arguing over the correct answer to a maths question and that's because it turns out the way you were taught algebra at school has a big impact on the outcome of the sum.

Depending on the method you use to solve the problem, there seems to be two possible answers to the question – but which one is the right one?

It all started when a girl called Em, who posts under the username @pjmdoll, shared a tweet instructing her followers to: "Solve this".

Alongside this she shared a cartoon of a classroom with an equation written on the blackboard.

More than 15,200 people have liked her tweet with thousands more responding with their answers.

The two most common answers people on Twitter reached are one and 16.

These different answers have caused a heated debate to break out online – with even the likes of Queer Eye's Bobby Berk getting involved to have his say.

Some agreed with him, but others claimed he was wrong.

Another proclaimed: "Anything other than one is absolutely wrong."

So how are people getting these answers?

Well, it seems those who followed a BODMAS method of working got 16 and those using PEMDAS got one.

While PEMDAS does things in order of parenthesis, exponents, multiplication/division, addition/subtraction.

Eventually some people gave up trying to work it out for themselves and turned to "the dad of all calculators" AKA Google Calculator to find out the answer.

The online tool says it's 16. Which was good enough for a lot of people.

However we decided to seek out an expert, to find out what was really going on.

A mathematics professor from Oxford University, who wished to remain anonymous, explained that there isn't one correct answer – as the equation has been ambiguously written, leaving it open to interpretation.

They said: "Without better brackets, there can be ambiguity.  There are conventions about the order of operations to try to resolve this, sometimes called BODMAS in UK schools.

"If it still seems unclear, it's best to include brackets to remove any possible ambiguity.  Mathematicians do not generally have problems communicating with each other about things like this, but for whatever reason people seem to enjoy posing these kinds of problems on social media!"

What do you think the answer is? Let us know in the comments below.

END_OF_DOCUMENT_TOKEN_TO_BE_REPLACED

END_OF_DOCUMENT_TOKEN_TO_BE_REPLACED
We and our partners use cookies on this site to improve our service, perform analytics, personalize advertising, measure advertising performance, and remember website preferences.Ok