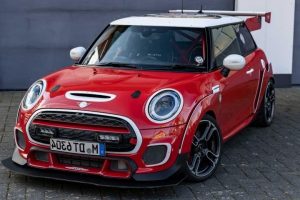 After a decade off the track, the MINI John Cooper Works will race once again at the Nürburgring later this year. The race car, which was entered by the private team Bulldog Racing, is slated to compete in the SP3T class.

This year will mark the 50th edition of Nürburgring’s 24-hour long race. Posing “the ultimate endurance test for man and machine,” the race will take place from May 26 to 29 on a 15.8-mile (approximately 25.4 km) circuit.

For the purpose of the race, the standard MINI JCW was updated with several modifications. A racing cage was installed on the model, the volume of its fuel tank was increased and it received aerodynamic add-ons, including an adjustable rear wing, covered underbody, a rear diffuser and front splitter.

This particular red and white MINI JCW model pays tribute to the classic color scheme of the 1960s racing cars.

In other automotive news, Tesla will no longer include mobile connectors with new vehicles.
Source: Read Full Article