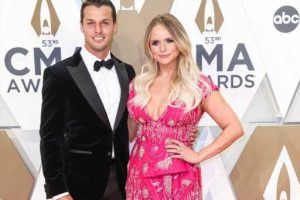 Miranda Lambert and husband Brendan McLoughlin were enjoying their Southern road trip over the last week in their Airstream, where they shared photos of stunning locations like the Biltmore Estate in Asheville, North Carolina, and the historic architecture in Charleston, South Carolina. But their relaxing vacation was abruptly cut short the other day when they were involved in a scary hit-and-run accident.

The country singer shared the details of what happened after a few idyllic days in Lake Oconee, Georgia, on her Instagram page. As they were passing through the Atlanta area, “an ass hole in a small car with temp plates was driving erratically and tried to squeeze between us and an semi truck going 70 on I-20 W.” The vehicle hit the passenger side of their Airstream and sent them fishtailing into the left lane.

McLoughlin was able to get their vehicle and trailer under control and they pulled over to the shoulder. Unfortunately, they were the only ones who stopped after the accident. “Nobody was hurt thank the good Lord,” continued Lambert. “But nobody stopped either and the car sped away. (Cool Bro)” She shared a video of the damage to the RV, which had scrapes and dents from being sideswiped and some shredded metal with wires hanging out of the vehicle. Amazingly, they were able to safely drive home to Nashville despite the unsettling incident.

The “Only Prettier” singer thanked her husband of two years for his steady driving skills in getting them off the road after being hit. Those years of maneuvering through aggressive city traffic as a New York City police officer probably came in handy — and might have been what kept him calm despite the situation.

Despite the scary end to the trip, Lambert didn’t lose perspective — she’s thankful the accident had an outcome they could easily recover from. She promised, “We are gonna be repaired and back to our vagabond ways soon. Anyway, overall it was an amazing trip and we learned we have a lot to see and a lot to be grateful for.”