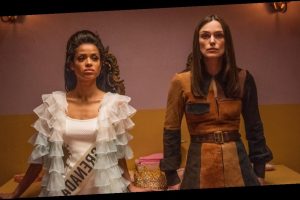 Based on an incredible true story, the comedic drama Misbehaviour centers on the Miss World competition in 1970 that launched a revolution. Arguing that beauty pageants were demeaning to women, the Women’s Liberation Movement and its spokesperson Sally Alexander (Keira Knightley) decided to protest and invade the stage of the most-watched TV show on the planet. When the show continued after the disruption, it made headlines once again when the winner was announced as Miss Grenada (Gugu Mbatha-Raw), the first Black woman to be crowned Miss World.

In POPSUGAR’s exclusive clip, we see the two women come face to face as they each make their voices heard in the fight for equality. Check out the scene above, and watch Misbehaviour in select theaters nationwide and on VOD everywhere.

END_OF_DOCUMENT_TOKEN_TO_BE_REPLACED

END_OF_DOCUMENT_TOKEN_TO_BE_REPLACED
We and our partners use cookies on this site to improve our service, perform analytics, personalize advertising, measure advertising performance, and remember website preferences.Ok