"Moon Knight" Episode Four Changed Everything We Thought We Knew 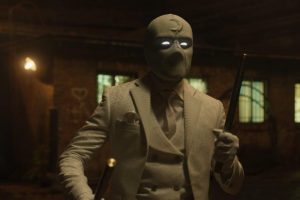 “Moon Knight” episode four is a wild ride from start to finish. The Marvel series for Disney+ stars Oscar Isaac as Marc Spector, a man with dissociative identity disorder who also happens to be the titular hero. He has at least one other personality that the audience knows about, Steven Grant. But in episode four, what’s real and what’s not becomes even more complicated.

At the start of the episode, the Egyptian god Khonshu (F. Murray Abraham) is trapped by the other gods in a statue. That’s important, because he’s Moon Knight’s sponsor, who helps protect him via a magical healing suit. Now Marc (and Steven) are without this supernatural protection and in some major trouble.

Together with Layla (May Calamawy), Marc finds a tomb they believe will lead them to Ammit, the Egyptian goddess that Arthur Harrow (Ethan Hawke) is trying to free in order to bring around the end of the world. But while the pair are arguing, Harrow finds them and shoots Marc in the chest.