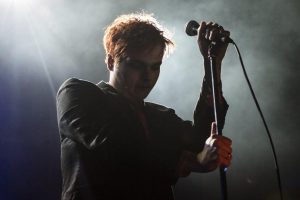 Emo kids, rejoice! My Chemical Romance have released their first new song since 2014. The band surprise dropped the song, “The Foundations of Decay,” on May 12. Their last song, “Fake Your Death,” was originally supposed to be part of their fifth album, but they never completed the project and included the track on their greatest-hits compilation instead.

“The Foundations of Decay” comes one week before the band restart their reunion tour. Technically, the tour began in 2019, but MCR only played one show in Los Angeles before the tour was put on pause due to the pandemic. First, they’ll make stops in Europe before traveling to America in August. They’re also booked for quite a few summer festivals, including Riot Fest and When We Were Young.

My Chemical Romance officially broke up in 2013. Lead singer Gerard Way continued to release music as a solo artist, including the 2020 song “Here Comes the End” for Netflix’s “The Umbrella Academy.” “The Umbrella Academy” is based on a comic-book series of the same name written by Way and illustrated by Gabriel Bá. Way is also an executive producer on the series, which returns this June.

In 2021, Way opened up about what it was like playing the one reunion show. “That was definitely the most fun I’ve ever had playing on stage with My Chemical Romance, for sure,” Way told NME. “Something that I tried to do, and this was conscious, was relinquish some control. I think about control a lot, and in the years since the band broke up I’ve really examined control in all of its forms.”

Excitement about the new song has fans wondering if a whole new My Chemical Romance album could be on the way, but the band have yet to share their future plans. Their last full album was “Danger Days: The True Lives of the Fabulous Killjoys,” released in 2010.

Listen to My Chemical Romance’s “The Foundations of Decay.”