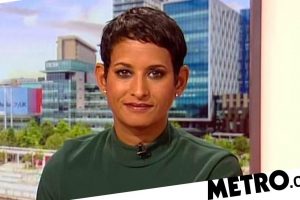 Naga Munchetty was forced to leave BBC Breakfast only 20 minutes into the show today (Friday), leaving Charlie Stayt to present on his own.

The pair were presenting the early morning news, when suddenly Charlie was sat on the red sofa alone.

He explained: ‘You may have noticed this morning, Naga has just stepped away from the sofa for a moment, with a slight struggle with her voice.

However, nearly three hours later, it was clear it wasn’t just ‘for a moment’, as Charlie ended the Breakfast programme alone.

Noticing the change, one viewer wrote: ‘Keep on going Charlie! Clearly a testing morning with Naga losing her voice and the loss of audio in Doha! Oh the joys of live broadcasting.’ 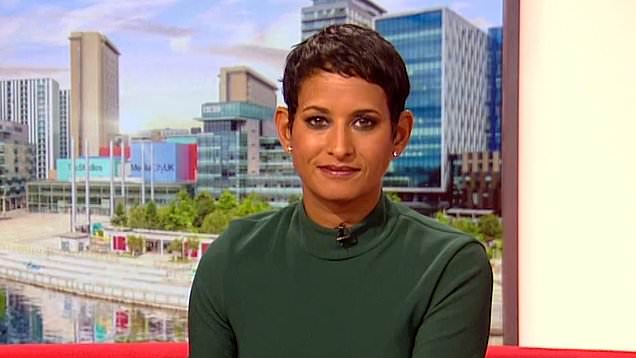 Another had penned earlier: ‘I think Charlie will have to go solo this morning, poor Naga is struggling!’

‘Morning Naga, I hope your voice gets better very soon fingers crossed,’ someone else wrote.

I think Charlie will have to go solo this morning, poor Naga is struggling!#BBCNEWS pic.twitter.com/7vsWmXFhdU

@BBCBreakfast keep on going Charlie! Clearly a testing morning with Naga losing her voice and the loss of audio in Doha! Oh the joys of live broadcasting

While it was Naga who dropped out of the show today due to illness, yesterday viewers voiced their concerns when Charlie erupted into a coughing fit and found himself unable to speak.

After recovering, he said: ‘And how odd that story prompted me to have a coughing fit. Strangely apt.’

Recently, Naga opened up about being told she was ‘useless’ during the early stages of her career, and how the hardship would lead to her going home ‘in tears’.

‘I had copy thrown at me when I first started in newspapers,’ she said.

‘I was told I was b****y useless. I did go home many a day in tears, but equally, I learnt not to make mistakes, that mistakes weren’t acceptable.’

BBC Breakfast airs weekdays from 6am on BBC One.