'Narcos: Mexico' Is Officially Renewed for a Third Season 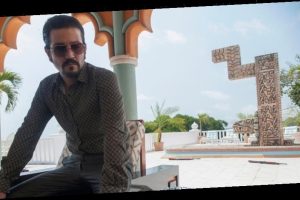 Netflix has confirmed that Narcos: Mexico has been ordered for a third season. However, Diego Luna will not reprise his role as cartel leader Félix Gallardo. Series co-creator Carlo Bernard will also be taking over from Eric Newman as showrunner.

“I am grateful for my five years at the helm of Narcos and Narcos: Mexico and am immensely proud of what this spectacular team has achieved with these shows,” Newman said in a statement. “Carlo Bernard is the first person I ever spoke to about this project, over ten years ago, and I am extremely pleased to leave the steering of Season 3 of Narcos: Mexico in his very capable hands.”

The series left off with Félix Gallardo, played by Luna, locked away in prison for his crimes. Season three will be set in the ’90s, following the action as Gallardo’s empire fractures into warring factions, political upheavals rage, and the drug trade becomes a global industry.

END_OF_DOCUMENT_TOKEN_TO_BE_REPLACED

END_OF_DOCUMENT_TOKEN_TO_BE_REPLACED
We and our partners use cookies on this site to improve our service, perform analytics, personalize advertising, measure advertising performance, and remember website preferences.Ok