NASA Is Testing Air Taxis in First Round of Flights 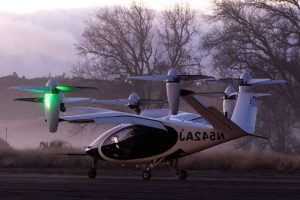 In its plan to advance cargo and passenger air transportation options, NASA has begun running test flights of air taxis. The space agency teamed up with electric aircraft company Joby Aviation to design and test the taxis, launching the debut partnership of its expansive Advanced Air Mobility (AAM) National Campaign when the first flights took off yesterday from a base in California.

During these test flights, NASA will be on the lookout for “information about how the vehicle moves, how the vehicle sounds, and how the vehicle communicates with controllers” in various scenarios planned out by Joby Aviation, per NASA’s press release. It will utilize over 50 microphones to gauge the acoustics of the air taxi throughout its flights.

Data from the tests will additionally serve to establish baseline standards for future vehicles and flights. Joby will be evaluating NASA’s own processes of determining flight safety and approving passengers.

NASA envisions that future air taxis could provide an affordable commercial service for transporting passengers and goods in cities and surrounding areas, describing that a potential AAM system could encompass services such as “package delivery drones, air taxis and medical transport vehicles.”

Testing of the flying taxis will take place over the next two weeks, concluding on Friday, September 10. More complicated scenarios and other vehicles are scheduled to be tested in 2022.

In other tech news, Facebook has continued to reduce political content on its news feed with new measures.
Source: Read Full Article